BOLINAS, Calif. -- A 79-foot adult female blue whale that died after it was struck by a ship will be left to decompose on a Bolinas beach, a Marine Mammal Center spokeswoman said Tuesday morning.

The dead whale was reported Thursday on remote Agate Beach where it will remain, center spokeswoman Laura Sherr said.

A necropsy attended by 25 scientists and volunteers on the beach determined the whale suffered injuries along its entire left side, including hemorrhaged and necrotic muscle and 10 broken ribs.

The whale's spine was badly fractured and the skull showed signs of trauma, according to the Marine Mammal Center.

The injuries are consistent with a ship strike, and results of tissue sampling will be available in a week or two, Sherr said.
Related topics:
societybolinaswhalewhale watchingboatsbeachesmarine mammal centeroceansanimals
Copyright 2020 by Bay City News, Inc. Republication, re-transmission or reuse without the express written consent of Bay City News, Inc. Is prohibited.
RELATED
Blue whale on Bolinas beach will be left to decompose 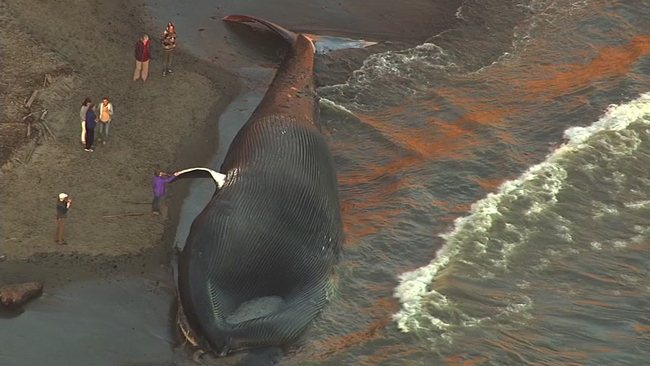