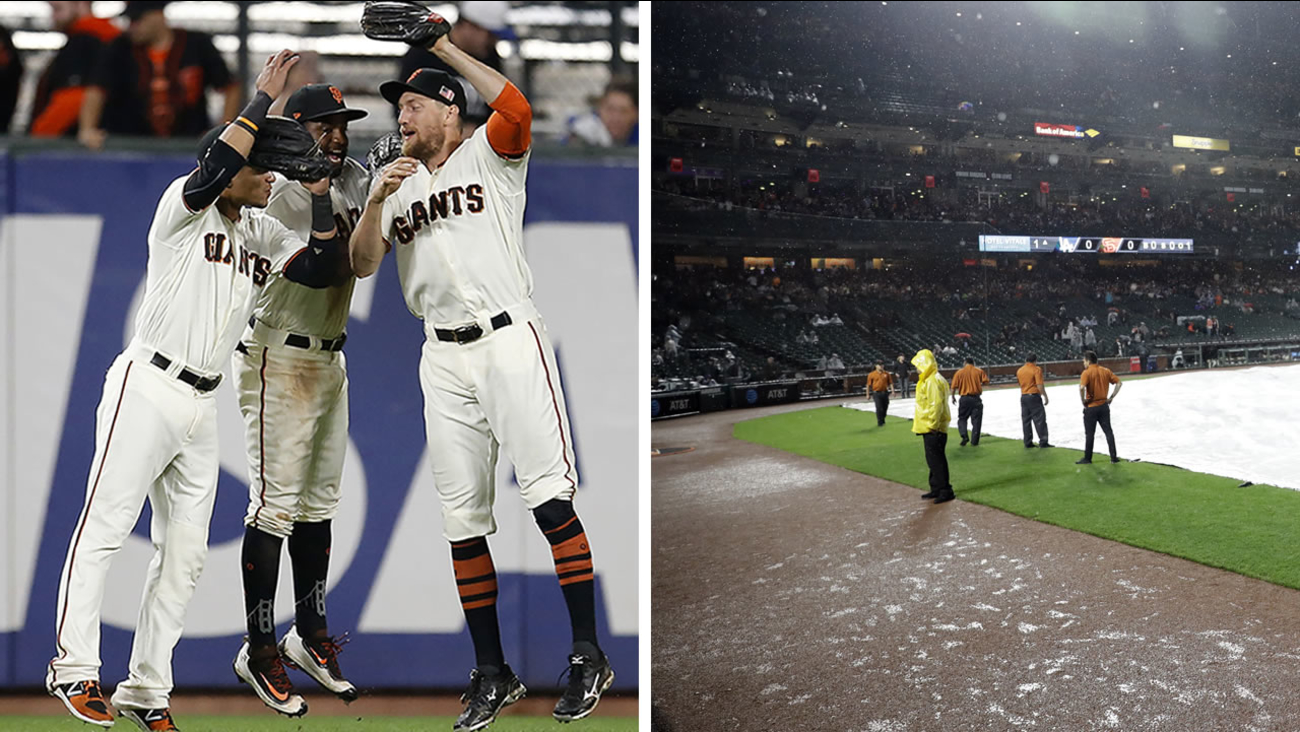 SAN FRANCISCO (KGO) -- It's 10:30 p.m. on a Monday at ABC7 and the lightning storm is the number one story -- we're tracking these bolts all over the skies as they light up the entire Bay Area with strikes of deep yellow and white.

It's still baseball season, and the San Francisco Giants had to roll out the tarps and delay the first pitch because everyone knows you shouldn't play baseball in a lightning storm.

Most fans would say "Who in their right mind would go out at midnight to a Giants game already in progress when they're this far back in the standings?" Well... I would. And I did. This is why I got up from my desk at 11:59 p.m.

Anyone who works at night knows that there's usually nothing going on after you're done. When most people get off work there are things like happy hour and even baseball games.

When you're done at midnight - there's nothing but bars that kick you out an hour after you get there and long drives home without traffic (that's a perk in the Bay Area for sure.)

So when a rare opportunity presents itself -- like a rain delay in the City By The Bay. You might be asking yourself -- why? Why would someone go to a baseball game in the rain after midnight? The answer is, "why not."

This was one of those moments that may never come again. In sports, when you're in the ballpark for a historic home run or a world series win, that stuff sticks with you when you're sitting at your desk at work the next day, the next month, or the next year. It's those memories that shape sports fans at work and at home.

So, I decided to make a memory. Instead of going home and going to sleep, getting a good night's rest and taking my sleepy time vitamins, I went to the ballpark -- AT&T Park: Paradise personified.

Tucked between the desolate midnight streets of San Francisco and a freezing cold McCovey Cove, the lights of the outfield created a ghostly fog as the mist flew past and into the air.

I watched vendors and security personnel huffed and puffed out of the ballpark and worried for a moment that the affair had been canceled during the five minutes it took to Uber from the station to the park. "Shoot," I thought. "No midnight memories for me."

I thanked the driver who laughed at me for what I was about to do and hopped out to Third Street. Willie Mays Gate looked like something out of a zombie movie. No people whatsoever - just the orange glow of the AT&T Park sign casting light onto the wet cement. Name one time you've seen it like that during a game.

Inside though, there was a dull roar -- some isolated cheers, chants and then I heard the thunk of wood against a baseball. "THUNK!"

They're playing in there! It's midnight and a major league hitter is at the plate. "I have to get in here," I thought.

I cut through the Dugout store and found a couple of nice security guards inside, "So, are you going to make me pay to get in here or can I catch a few innings?"

And just like that, it felt like a different place in time. Some fans told me about how at Candlestick they'd let you in for free after a certain amount of innings. Not anymore, not ever except right now.

All of the concession stands were shut down by the 4th inning. Of course, merchandise was still for sale and people were buying. My attempt to get a midnight snack was foiled. Usually, they shut everything down during the 7th inning, but then again, the 7th inning doesn't usually happen at 2 a.m.

Just past the concourse, the field glowed like the one in "Field of Dreams" -- an island of green among the fog and mist. There they were, the boys in Orange and Black.

My favorite player Brandon Crawford ready for a grounder at short, Pablo "Panda" Sandoval at third. All was right in the world.

The Los Angeles Dodgers are in the hunt for the World Series, but nobody at this game really cared. They were surprised and delighted to be at their happy place long past when it was supposed to close.

With the late start came a few perks - moving down a few rows to get closer to the action, no lines for the bathroom, and a greater chance of getting a foul ball. It was a 10-year-old's dream.

This was the only time in my history as a Giants fan where I didn't see a throng of children jumping up and down in line for the Coca Cola slide and fans eagerly moving down the stands without any guff from the ushers. There weren't any overheated fans in line for a Ghirardelli sundae either. This was baseball on Pluto.

This is the first time in history that you won't see a long line of kids at the famous Coca Cola slide. pic.twitter.com/2O6GEQDU8r

The unnatural tropical heat found lots of fans ditching their blankets and hoodies in favor of short-sleeved jerseys in the stands. I even took off my jacket, revealing the pink collared shirt I wore to work that day.

There were only about 3,000 people in the stands, but man did their energy feel like 30,000. These were the die-hards - the dreamers, the fans that didn't care about the standings or the weather. They just wanted to watch some baseball at 2 a.m.

Anyone heckling anywhere could be heard by everyone. One woman, who was inexplicably sitting up in the highest row of the bleachers professed her love for Hunter Pence as if she were in her own little world, "I LOVE YOUUUUUUUUUUU!"

It was one of those rare Bay Area nights that will never happen again.

As I sat in the front row of the third base line watching Derek Law warm up 5 feet away I sighed and breathed in a little fog - thankful for the rain delay and another opportunity to watch the team I love in a city that's becoming my home. I'd never been this close before. I was close enough to hear the whiz of the ball snap into the catcher's glove. I was in heaven.

At that point, there was no other option than to stay until the end - rain or shine, lightning or fog, nothing was pulling me out of that seat. A handful of other fans went nuts to "When the Lights Go Down" one even took out his rain-soaked poncho and swung it over his head as if it were part of some choreographed dance. Nothing mattered but that single moment in time - I was watching someone experience pure joy. Soggy, 2 a.m. joy.

The Giants pulled out a win thanks to a nice hit streak from Hunter Pence and some stellar plays in the field, but even that didn't matter.

After I peeled myself off the wet seat and shook the mist out of my hair, I realized that I saw something that only 3,000 other people had seen and it was perfect.

Maybe next time when you're getting ready to go to sleep, and something unexpected happens you'll forget about the deadlines and commitments and just go for it. Go to the baseball game at midnight. Because why not?