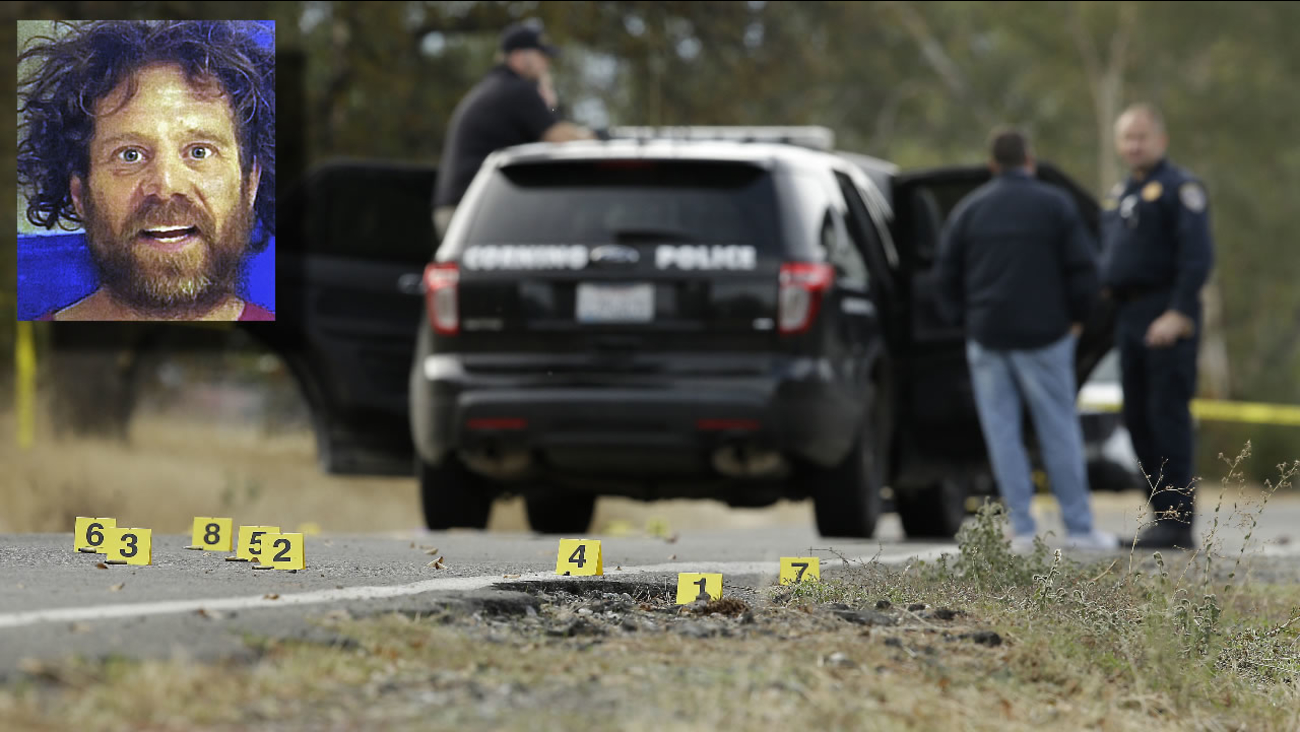 Yellow tags mark where bullet casings found at one of the scenes of a shooting spree at Rancho Tehama Reserve, near Corning, Calif., Tuesday, Nov. 14, 2017.

RED BLUFF, Calif. -- A day after a California gunman killed five people in the country's latest shooting rampage, police faced accusations of having previously turned a blind eye to the troubled shooter who was known for firing off guns despite a court order that barred him from owning firearms.

At a tense news conference Wednesday, police conceded that neighbors had repeatedly complained about Kevin Janson Neal firing hundreds of rounds from his house.

"He was not law enforcement friendly. He would not come to the door," Johnston said. "You have to understand we can't anticipate what people are going to do. We don't have a crystal ball."

Asked about Neal's motive, Johnston responded: "Madman on the loose. The case is remarkably clear. We will move forward and we will start the healing process."

The evidence that emerged Wednesday, however, along with residents' statements raised questions about whether lawlessness was occasionally tolerated.

Neal was also known to have violent squabbles with his neighbors and his wife, both of whom were among his first victims Tuesday.

Police found the bullet-riddled body of Neal's wife stuffed under the floorboards of their home in the rural community of Rancho Tehama Reserve. They believe her slaying was the start of the rampage.

RELATED: Father who witnessed shooting at California school: We were stunned

"We are confident that he murdered her," Johnson said.

Neal then shot two of his neighbors in an apparent act of revenge before he went looking for random victims, ultimately killing a total of five people, all adults, and wounding 10 at different locations that included the community's elementary school.

At the time of the attack, Neal was out of custody on bail after being charged in January with stabbing one of the neighbors he later killed in the rampage.

After the January assault, a judge barred Neal from having guns, according to court records.

The records also show that Neal was charged with illegally firing a weapon and possessing an illegal assault rifle on Jan. 31.

He was charged with five felonies and two misdemeanors. As part of a protective order that barred him from "owning, possessing, purchasing or attempting to purchase firearms," Neal was ordered to stay away from the two female neighbors he had threatened.

The neighbor he was accused of stabbing obtained a restraining order against him in February, writing to the court that Neal fired guns to scare people in her house and alleging that he was "very unpredictable and unstable" and that he had "anger issues," according to court documents.

The gunman's sister, Sheridan Orr, said her brother had struggled with mental illness throughout his life and at times had a violent temper.

She said Neal had "no business" owning firearms.

At Wednesday's news conference, Johnston initially said Neal "was not prohibited from owning firearms" but later acknowledged the protective order against him.

Records show Neal certified that he surrendered his weapons in February, but Johnston said Wednesday they had recovered two homemade assault rifles and two handguns registered to someone else.

Laurie Levenson, a Loyola Law School professor, said police officers don't need to be eyewitnesses to take action when a person is suspected of violating a restraining order.

"You can have probable cause even if officers don't see a gun or hear shots," she said. "They do not have to see the suspect with the weapon if all the circumstantial evidence indicates that he is violating the orders."

Levenson said officers don't even need a warrant to search a suspect's home if they believe the caller and the evidence they are hearing and collecting indicate the suspect is firing a gun.

"''If an officer believes there is someone with a weapon who is not entitled to have a weapon, the law permits the officer to go in," she said.

During the rampage that lasted 25 minutes, Johnston said the gunman spent about six minutes shooting into Rancho Tehama Elementary School before driving off to keep shooting elsewhere.

Police said surveillance video shows the shooter unsuccessfully trying to enter the school after quick-thinking staff members locked the outside doors and barricaded themselves inside when they heard gunshots.

Witnesses reported hearing gunshots and children screaming at the school, which has about 100 students from kindergarten through fifth grade.

"At that point he was able to get everyone inside so there was no one left on the blacktop," Morehouse said. "He's an absolute hero."

The rampage ended when a patrol car rammed the stolen vehicle Neal was driving and police killed him in a shootout.

Dillon Elliott said he witnessed the rolling gun battle from a coffee shop and parking lot as the gunman and deputies screamed by.

"All hell broke loose. I mean I've never heard gunshots like that before," he said.

Elliott's parents have lived in the sparsely populated area of rolling woodlands dotted with grazing cattle about 130 miles north of Sacramento since 1986. He moved away in 2001.

"There's hardly any police presence out here," he said. "In all the time we've been out here there has been almost, I would say almost zero police presence. Every so often you'll see them if it's super bad."

He said his father, who was on the homeowners' association board, was threatened in the late 80s and early 90s during a dispute with a neighbor and deputies never responded.

"It's almost like they think we're lawless out here and they just don't care," he said.