Police responded around 11 p.m. to a massive fight at Resorts World Casino Hotel in Queens where 300 people crowded into the food court for the opening of a Fat Tuesdays bar. Several fights broke out involving dozens of people. According to the woman who took cell phone video, the fight had nothing to do with wins and losses at the casino, but all to do with the bar, which apparently took a long time to serve. She told Eyewitness News that patrons were waiting an hour and a half in line, and then ethe fight broke out. 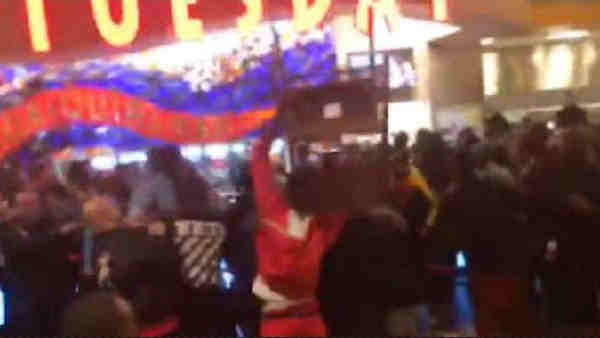 RAW VIDEO: Massive brawl at Queens casino
Police responded to a massive fight at Resorts World Casino Hotel where 300 people crowded into the opening of a Fat Tuesdays bar.

A 30-year-old was charged with disorderly conduct and released; he was not identified. The two 23-year-olds were detained.

Police said no shots were fired. Thousands of dollars in damage was done to the property.

Officials believe only two dozen customers in the food court managed to wreak all the havoc. Police said all injuries appear to be minor. One police officer had a minor hand injury and was taken to an area hospital. Four security guards also were hurt.

A Spokesperson from Resorts World issued a statement saying,

"We are reviewing all aspects of this unfortunate event and are fully committed to taking steps to ensure similar acts do not take place ever again."