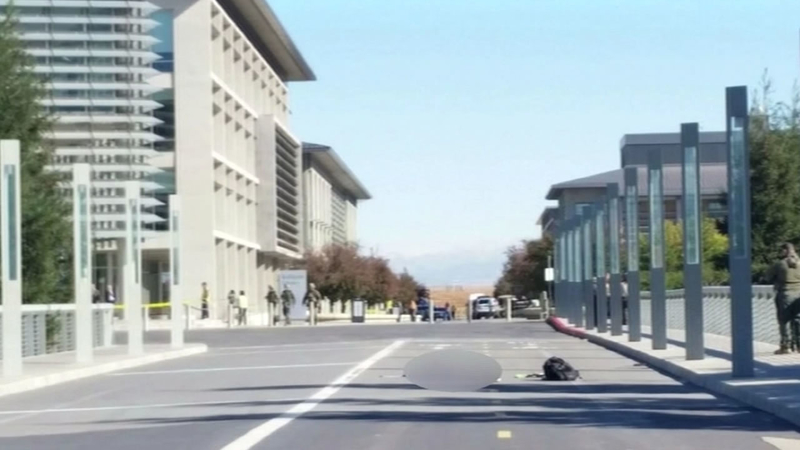 MERCED, Calif. (KGO) -- UC Merced is under a precautionary lockdown after a male student stabbed four people and the suspect was shot to death by police. Investigators say it started with a fight Wednesday morning inside a classroom. The suspect pulled a knife and then took his attack outside.

Merced sheriff says suspect stabbed one @ucmerced victim from behind as she was sitting "minding her own business." pic.twitter.com/A3SR5LfLzI

Students are still in shock, but are praising the school for how it handled this emergency. They say they were quickly notified and told to evacuate.

School officials and authorities held a press conference at 4 p.m. and they confirmed the suspect was a student living on campus.

The suspect is from California, but they are not identifying him yet because they say next of kin have not been notified. Authorities also confirmed that the FBI is on the scene assisting in the investigation.

John Price's son, Byron, is a construction worker who was working on the UC Merced campus when he heard what he thought was a fight and ran into a classroom.

John said, "They heard a commotion in a classroom across the hallway, then they heard screaming. The guy came out of the classroom and lunged at him. Byron ended up going down on his back, he got stabbed, but he was able to kick the guy in the head."

Student Alex Lopez, 21, was heading to class when he realized something was wrong on campus. "I was listening to a podcast and there was a break in talking and I just hear a gunshot," he said.

Other students said they didn't hear anything, but knew something was wrong when they were told they had to leave.

"Somebody walked into the classroom saying we all have to leave..." student Alfredo Calderon said. "And as we were exiting, I just looked around the corner and I saw someone laying on the floor, all the police were blocking everything off."

The stabbing started inside Cob building near the library and then moved outside. One student said she saw the suspect wearing all black and running from an officer. UC Merced confirms he was a current student.

"He had like a sweatshirt, and the hoodie was up... and it covered his whole face," student Blanca Ayala said.

The suspect carried a black backpack. He was shot by a campus police officer on Scholars Bridge, which cuts through the middle of campus.

"We walked closer and saw the police trying to resuscitate him and bring him back," student Cara Baird said.

"If that officer hadn't been in the location that he was, at the time this had occurred, I really believe there would have been more victims to this," Merced County Sheriff Vern Warnke said.

Warnke told the media Byron acted heroically. He explained, "The contract worker actually went in, thinking it was a student fight, and ended up stumbling onto the stabbing in progress. I think that he, through is actions, saved this one student's life."

At a 4 p.m. press conference, UC Merced Chancellor Dorothy Leland had a message for parents. She said, "The person who caused this event will no longer be able to cause an event like this in the future. Their children are safe here."

The students who live on campus have been allowed to stay, but there will be no classes held on Thursday, they will resume on Friday.

The school with more than 6,600 students is about 120 miles south of Sacramento in the farm-rich San Joaquin Valley. The campus in the city of Merced opened a decade ago and is the newest college in the University of California system. It is the first UC campus built since 1965.

Sweet reunion. The Duffy family was reunited after the campus was locked down. The kids were safe in the nursery. pic.twitter.com/gdxZ395dvF

Another angle of Scholar's Bridge after stabbing suspect was shot by police. Backpack & shoes at his side.@ucmerced pic.twitter.com/rG4bBGbipq

Aftermath of @ucmerced stabbing shows one of two victims seriously injured being carried to helicopter. pic.twitter.com/moxFSWfuXo

Update: Campus is closed. Classes are canceled. Do not come to campus. #ICYMI

Update: Counseling and Psychological Services is available to students affected by today's events. (209) 228-4266 or counseling@ucmerced.edu