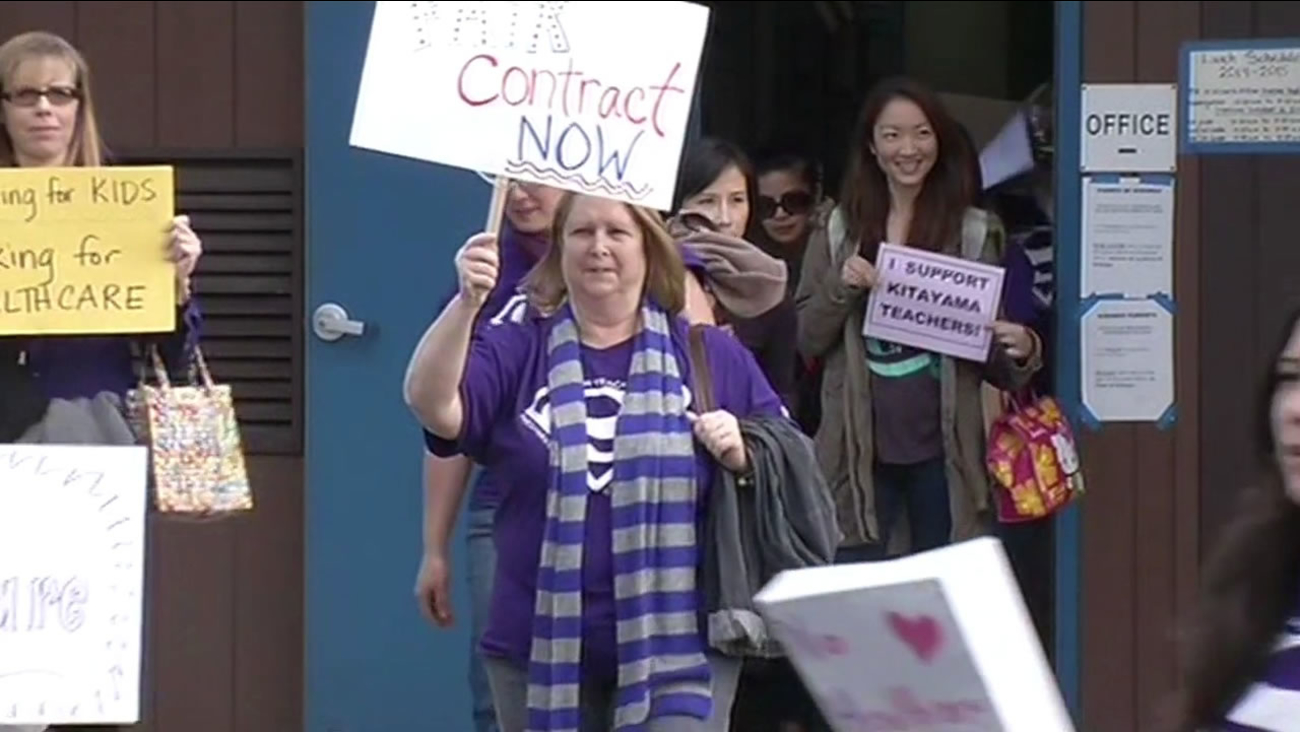 UNION CITY, Calif. (KGO) -- Things are heating up between the teachers union and the New Haven Unified School District.

Students left Kitayama Elementary School in Union City at 2:05 p.m. and the teachers followed shortly after.

"Basically, it's a message to the administration that we are serious. I usually stay here until 8:30 p.m. It's 'Work to Rule,'" teacher Eric Munoz said.

"Work to Rule" means teachers do no more than the minimum required by the rules of their contract.

This action was taken after contract negotiations stalled between their union and the New Haven Unified School District. The main sticking point is health care.

The district currently pays more than $22,000 to cover a teacher's Kaiser Family Plan and Delta Dental. That's tied into their salaries. But the district wants to cap that amount.

"We're going to stop doing that after $22,000, what we want to be talking about is raises," NHUSD spokesperson John Mattos said. "We want to give people money for raises as opposed to continue to tie ourselves to the Kaiser family."

The district is proposing a 2 percent hike this year and a 1 percent a year increase for the next two years.

"Our teachers have spoken loud and clear that their primary concern is to see the health care funded first and we'll then talk about salary increases," New Haven Teachers Association spokesman Paul Stickland said.

Teachers are concerned that if health care costs skyrocket, the proposed salary increases won't be enough to cover them.

The district acknowledges this could potentially happen, although health care costs were down slightly last year.

"If the salary increases didn't meet a proposed increase to the health care, then it could come out of their pay check," Mattos added.

This action will continue for two weeks.

"The kids lose out, but I also understand their point of view," parent Gabrielle Salazar said.

If there is no progress in the negotiations, the union says it will have a strike vote in the spring.
Related topics:
educationunion cityteacherkaiser permanentehealth caresalary
Copyright © 2021 KGO-TV. All Rights Reserved.
TOP STORIES
Shelter-in-place order issued for San Jose brush fire
Election to recall Newsom is much tighter among these CA voters: poll
Flex Alert issued for California for Wednesday from 4 p.m. to 9 p.m.
CDC reverses course on indoor masks in some parts of US
Santa Cruz concert linked to positive COVID-19 cases
Gov. Newsom pulls kids from summer camp with no mask requirement
Barbara Boxer recounts attack near her Oakland apartment
Show More
Bear cub recovers from Tamarack Fire burns
Oakland author discusses new book 'While We Were Dating'
Bay Area teen attacked by crocodile while vacationing in Mexico
Black car buyer's experience marred by dealer's 'racist' Facebook post
CSU to require all students, staff to get COVID-19 vaccine
More TOP STORIES News