Above the entrance of the concentration camp, a German sign still stands that translates to: "Work makes you free."

The commemorations were tinged with a sense of anxiety at the growing anti-Semitism and radicalism in Europe and the Middle East.

"Jews are targeted in Europe once again because they are Jews," said Ronald Lauder, president of the World Jewish Congress.

One survivor, Roman Kent, became emotional as he issued a plea to world leaders to remember the atrocities of World War II and fight for tolerance.

Kent and his brother survived being imprisoned at several Nazi death camps.

This may be one of the last ceremonies to include more than a handful of survivors. Most of the 300 in attendance were in their 90s.

The Germans killed some 1.1 million people at the camp, most of them Jews, but also Gypsies, homosexuals, Polish political prisoners and others. 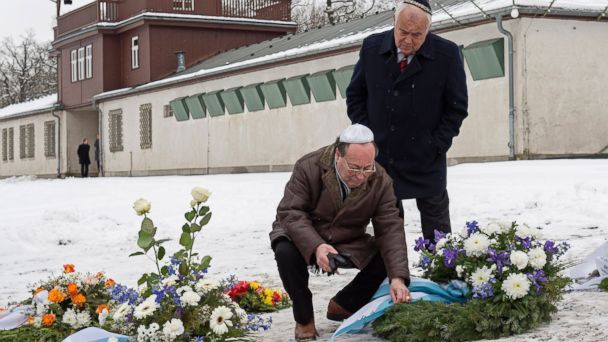