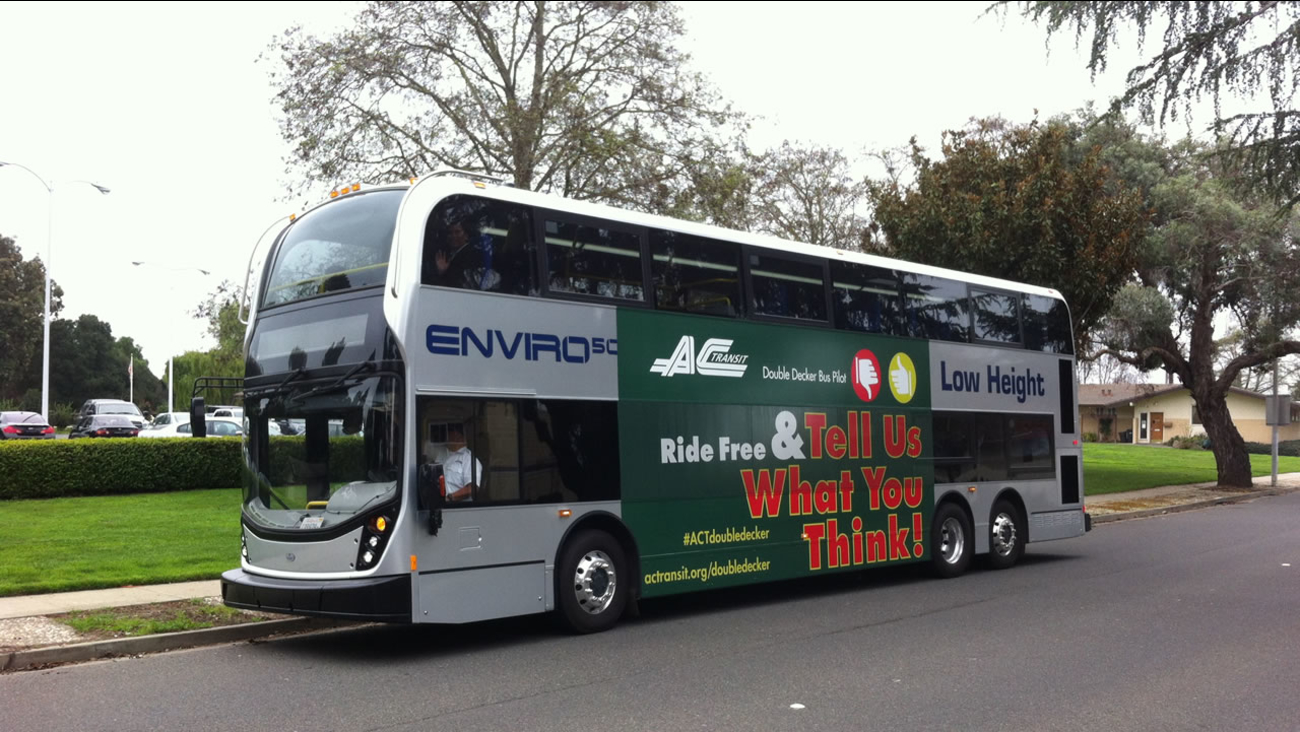 Bay City News
OAKLAND, Calif. -- AC Transit on Monday will begin a three-week pilot program in which it will use a 42-foot-long, double-decker bus on selected longer routes in its service area in 13 cities and surrounding areas in Alameda and Contra Costa counties.

Bus agency officials said the 80-seat coach will offer riders comfortable excursions with spectacular views, especially on transbay routes that go to and from San Francisco.

On Monday, the bus will make its first trip on the Line U, which goes from Fremont to Stanford University. It will then be deployed on other daily routes, particularly on transbay routes.

AC Transit spokesman Clarence Johnson said Thursdday that the double-decker bus has a much larger capacity than the current articulated, accordion-style buses used by the agency, which only seat about 50 people.

Johnson said the idea is for AC Transit to gauge customer reaction, assess how well the bus functions and ultimately determine whether the bus will be permanently added to its fleet.

AC Transit General Manager David Armijo said in a statement, "We have been operating transbay service for more than 50 years, and we want to look at what is the best vehicle that best fits us now, given our current needs."

He said, "We've tried a lot of different kinds of coaches. But until now we haven't tried this one."

People who want to get a close-up view of the bus can look at it in front of AC Transit's headquarters at 1600 Franklin Street in downtown Oakland from 10 a.m. to 5 p.m. next Wednesday.

They also say there will be free fares for all who board it during its three-week trial run.

There will be ambassadors aboard each run who will answer questions, ensure passenger safety and distribute written surveys to get feedback from riders.

They will travel on the FS Line leaving at 8:18 a.m. from Shattuck and University avenues in Berkeley and arrive at 8:47 a.m. at the Transbay Temporary Terminal in San Francisco.

They will be greeted there by Maria Ayerdi-Kaplan, the executive director of the Transbay Joint Powers Authority.

The bus will then be on display at the Transbay Termination from 11:30 a.m. to 1 p.m. the next six weekdays, until March 6.

More information on AC Transit's double-decker bus pilot program and its daily schedule can be found on the agency's website.