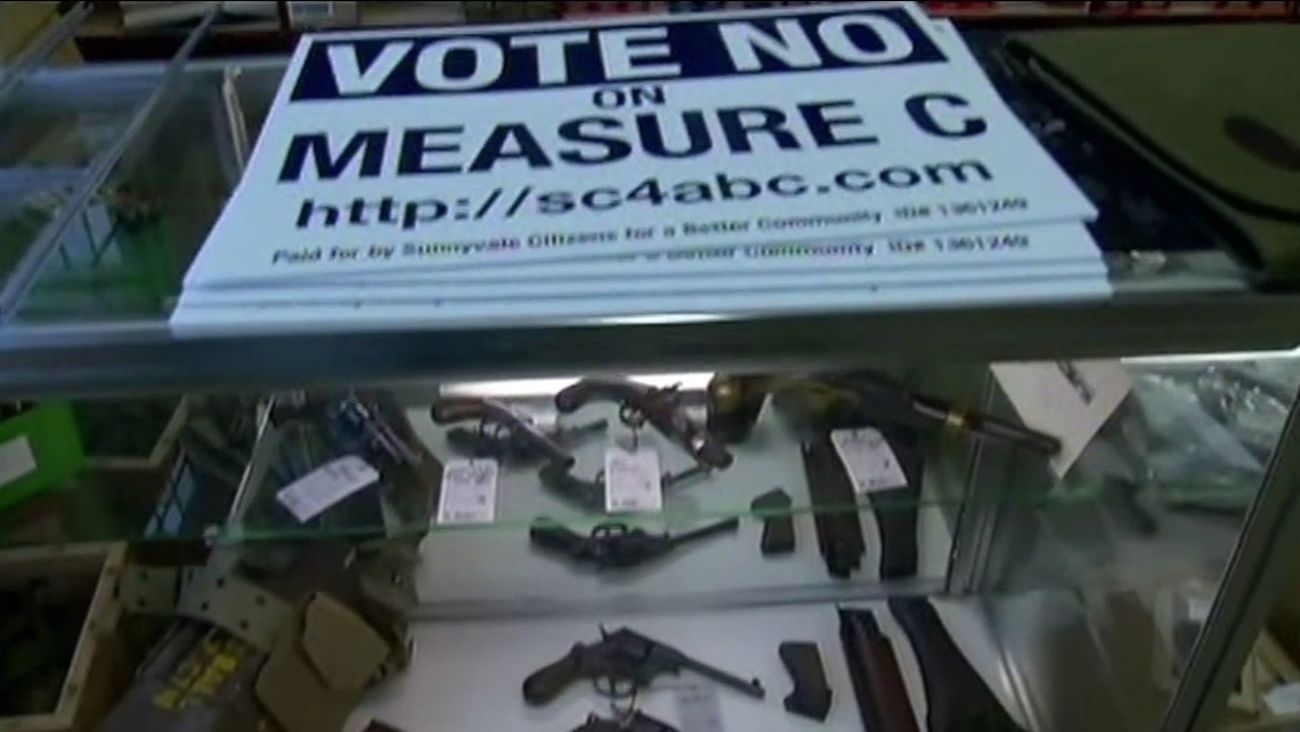 KGO
SUNNYVALE, Calif. -- A ban by the city of Sunnyvale on high-capacity ammunition-loading gun magazines was left in place, at least for the time being, by a federal appeals court in San Francisco Wednesday.

The 9th U.S. Circuit Court of Appeals upheld a decision by a federal trial judge in San Jose last year to deny a request by five Sunnyvale residents for a preliminary injunction blocking the measure.

The ban is part of an initiative approved by city voters in 2013 as Measure C. It prohibits possession of ammunition magazines that hold more than 10 automatically reloading bullets. The law allows a few exceptions, such as one for law enforcement officers.

A three-judge panel of the appeals court said the Sunnyvale measure does not place a severe burden on the constitutional Second Amendment right to bear arms and that it promotes a legitimate public safety objective.

"So, too, are Sunnyvale's interests in reducing the harm and lethality of gun injuries in general, and in particular as against law enforcement officers," Hawkins wrote in the decision.

The decision is the first time that the 9th Circuit, which has jurisdiction over nine western states, has ruled on whether a ban on high-capacity gun magazines appears to be constitutional.

The only other federal appeals court in the nation to have addressed such bans is one based in Washington, D.C., which upheld a similar law in that city in 2011.

In a landmark decision known as the Heller case in 2008, the U.S. Supreme Court said the constitutional right to bear arms extends to individual gun possession, but also said that some limits are permissible.

The lawsuit challenging the Sunnyvale ban is one of a number of cases filed by gun rights advocates since 2008 to test the scope of the Heller decision.

Today's ruling affirms a March 5, 2014, decision in which U.S. District Judge Ronald Whyte of San Jose declined to grant a preliminary injunction. Under the terms of Measure C, Sunnyvale residents had to remove their high-capacity magazines from the city or give them to police or a licensed gunsmith by March 6, 2014.

The 9th Circuit decision allows continued enforcement of the ban while the lawsuit by the five citizens proceeds, but the plaintiffs are entitled to a full trial at a later date and can also appeal today's decision.

Chuck Michel, a lawyer for the plaintiffs, said, "An appeal of this decision is already being prepared."

The appeal will be either an immediate appeal to the U.S. Supreme Court or a request to the 9th Circuit for reconsideration by an expanded 11-judge panel, he said.

"This decision, like other recent Second Amendment decisions from the 9th Circuit, is based on a fundamental misapplication of the Supreme Court's ruling in the Heller case, and it is time for the Supreme Court to emphatically let lower courts know that it meant what it said," Michael said.

Sunnyvale City Manager Deanna Santana said in a statement, "A large majority of Sunnyvale voters passed Measure C in the interest of public safety so we are very pleased that the 9th Circuit upheld the district court's ruling."

Tony Schoenberg, a lawyer for the city, said that about half a dozen federal trial judges in the nation, in addition to the two appeals courts, have allowed similar bans on high-capacity magazines to remain in force and none have said such measures are unconstitutional.

"We think it is a very modest, common-sense public safety measure," the attorney said.

One of the other federal trial judges to rule on the issue is U.S. District Judge William Alsup of San Francisco, who in February 2014 declined to issue a preliminary injunction blocking a similar San Francisco law.

The following month, the plaintiffs in that case, who included a group of retired police officers and four individuals, voluntarily dismissed their lawsuit, according to court records.

In the Sunnyvale case, the city defended the law by presenting evidence that large-capacity magazines are disproportionately used in mass shootings and in attacks on law enforcement officers.

Hawkins wrote, "Measure C does not affect the ability of law-abiding citizens to possess the quintessential self-defense weapon -- the handgun.

"Rather, Measure C restricts possession of only a subset of magazines that are over a certain capacity," Hawkins said.

Thus, the ban "does not warrant a finding that it cannot survive constitutional scrutiny of any level," Hawkins wrote for the court.

A 2000 California law prohibits the manufacture, importation, sale, gift or loan of magazines capable of holding more than 10 rounds, but does not address possession of the devices.

The Sunnyvale and San Francisco laws were intended to close a perceived loophole by banning possession as well.