Warriors fly back to Memphis for Game 6 against Grizzlies 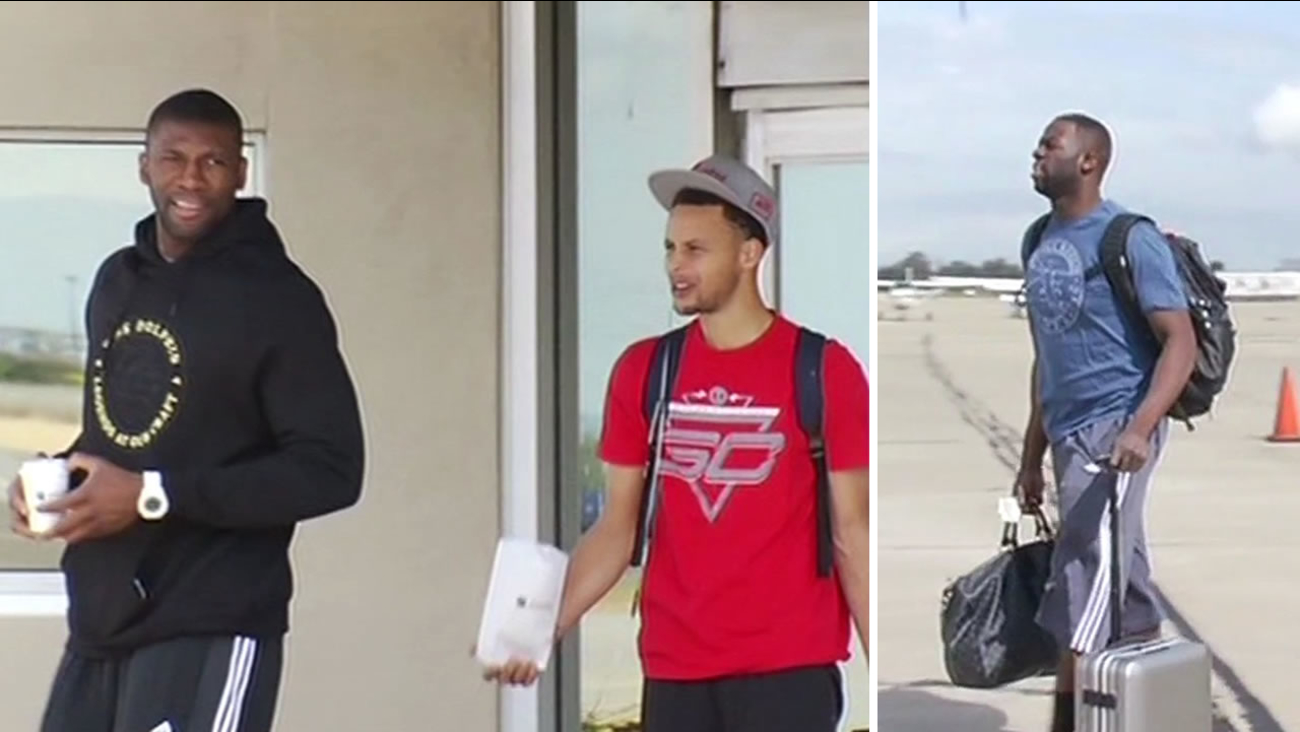 Golden State Warriors stars Festus Ezeli, Steph Curry, and Draymond Green prepare to board a plane in Oakland, Calif. on May 14, 2015. (KGO-TV)

OAKLAND, Calif. (KGO) -- The Golden State Warriors are flying out to Memphis, hoping to come back with the Western Conference semifinals title. The Dubs need just one more win after an impressive victory at Oracle Arena on Wednesday night.

Steph Curry and Festus Ezeli walked on the plane together, Curry with a bag of early morning popcorn.

MVP #StephCurry walking to the plane with @fezzyfel. #DubNation pic.twitter.com/CdVL9CfNZV

I think I uncovered the diet secret to record breaking 3 pt. shooting by #StephCurry. Popcorn at 10am. #DubNation pic.twitter.com/oQDFBSHMGs

The MVP and other players, including Dramond Green, seemed upbeat after the team's big win in Oakland.

The players will have to deal with the Memphis fans on Friday night. But they know it's nothing compared to what opponents have to face when they play at Oracle Arena in Oakland.

Thompson spoke about what it's like to play in front of the home crowd.

"That crowd, man it's great," he said. "Like we stated before, best in the NBA. And man, it's just the best time of the year when we're playing in the playoffs at Oracle."

Good to see @Money23Green & @KlayThompson getting on the plane to Memphis. #DubNation pic.twitter.com/eoQgYVv4vG

Curry was hot at the end of the first quarter, hitting from long distance and becoming the fastest player to reach 100 playoff three-pointers. He had 18 points.

But the play everyone was talking about on social media was when Harrison Barnes slipped and did the splits while guarding Courtney Lee. He was okay. In fact, he had a nice game with 14 points.

Everyone is hoping for a win in Memphis. But even if the Warriors lose Friday night, they will have a chance to close out the series in Game 7 Sunday at Oracle Arena.

Please do not forget the Big Man! @andrewbogut is here. Now the #Warriors can take off for Memphis. #DubNation pic.twitter.com/D7XBYMNIbs

The plane to Memphis doesn't leave until the MVP #StephCurry is here! #DubNation pic.twitter.com/6pSB6dTHmS

#Warriors David Lee is on the plane! #DubNation pic.twitter.com/EsH3vW2z8h

#Warriors @TheBlurBarbosa getting on the plane & waved hi to the media. #DubNation pic.twitter.com/VXCd4yCxqD

Waiting for #Warriors to arrive at #Oakland airport for their trip to Memphis. Game 6 tomorrow night. #DubNation pic.twitter.com/ybmE59v1Qs