Expert: Decibel level at Oracle during Warriors game is similar to jet engine 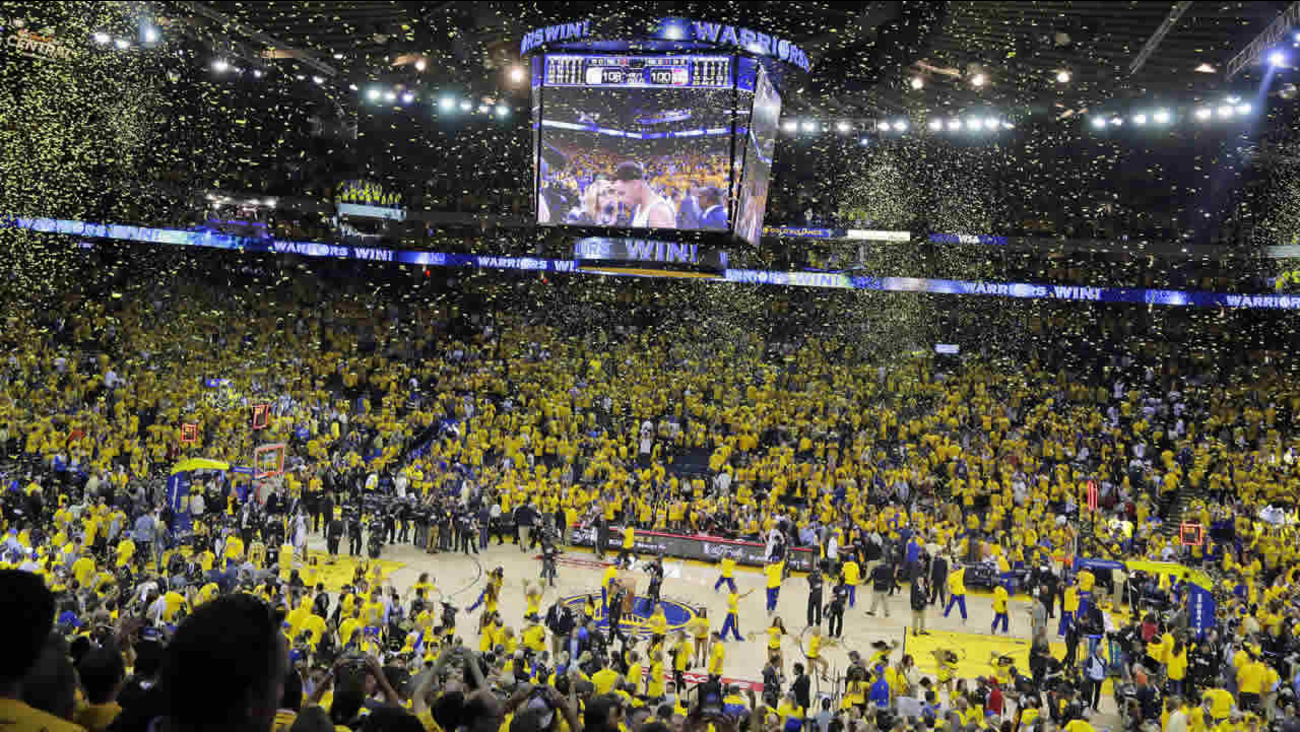 Confetti falls at Oracle Arena after Game 1 of the NBA Finals between the Golden State Warriors and the Cleveland Cavaliers in Oakland, Calif., June 4, 2015. (AP Photo/Eric Risberg)

OAKLAND, Calif. (KGO) -- The Golden State Warriors headed out to Cleveland on Monday. They're looking to bounce back in Game 3 of the NBA Finals. But when they face the Cavaliers on Tuesday, the Dubs will be playing without their secret weapon. The fans at Oracle Arena, proudly nicknamed Roaracle, are known for their loud cheering. And now
LeBron James is challenging Cavs fans to be even louder. But could all that noise be detrimental to their hearing?

During the playoffs with the New Orleans Pelicans, their coach said he wasn't sure the decibel level at Oracle was legal. And it's only gotten louder during the finals.

"It was insane," said one fan. "Like nothing else I've ever been to."

Mont Stong is an audiologist in San Francisco who treats patients with hearing loss. He estimates Oracle's decibel levels in the 100 to 120 range, which is like listening to a chainsaw or the engines of a jet plane. It's noise that he says can be temporarily or permanently detrimental.

"Any kind of auditorium that is totally enclosed, is very loud, and that loud sound doesn't have an opportunity to escape," he said.

He suggests fans wear earplugs or headphones like the ones little Riley Curry was seen wearing after Game 1.

Not candy-earplugs! Would you wear them Oracle Arena where the noise is at chainsaw decibel level? pic.twitter.com/rQYzpx2Lnh

But fans at the Warriors team store told ABC7 News that they aren't worried about the risk.

"The experience, the excitement more than makes up for it," said one fan.

"I can understand why," Stong said. "I mean, it's the excitement, you want to make noise, I get it, but it's not healthy for your hearing to do that, no."

The raucous Warriors fans are legendary. Even King James had to acknowledge it.

And that's not likely to change.

PHOTOS: Behind the scenes of the NBA Finals on ABC7
The Golden State Warriors beat the Cleveland Cavaliers in the NBA Finals. Here are photos of ABC7 covering the action all the way to their victory.
Related topics:
sportsoaklandoracle arenaohionba playoffshealthnba finalsnbagolden state warriorsbasketballstephen currydoctorscleveland cavaliers
Copyright © 2020 KGO-TV. All Rights Reserved.
RELATED