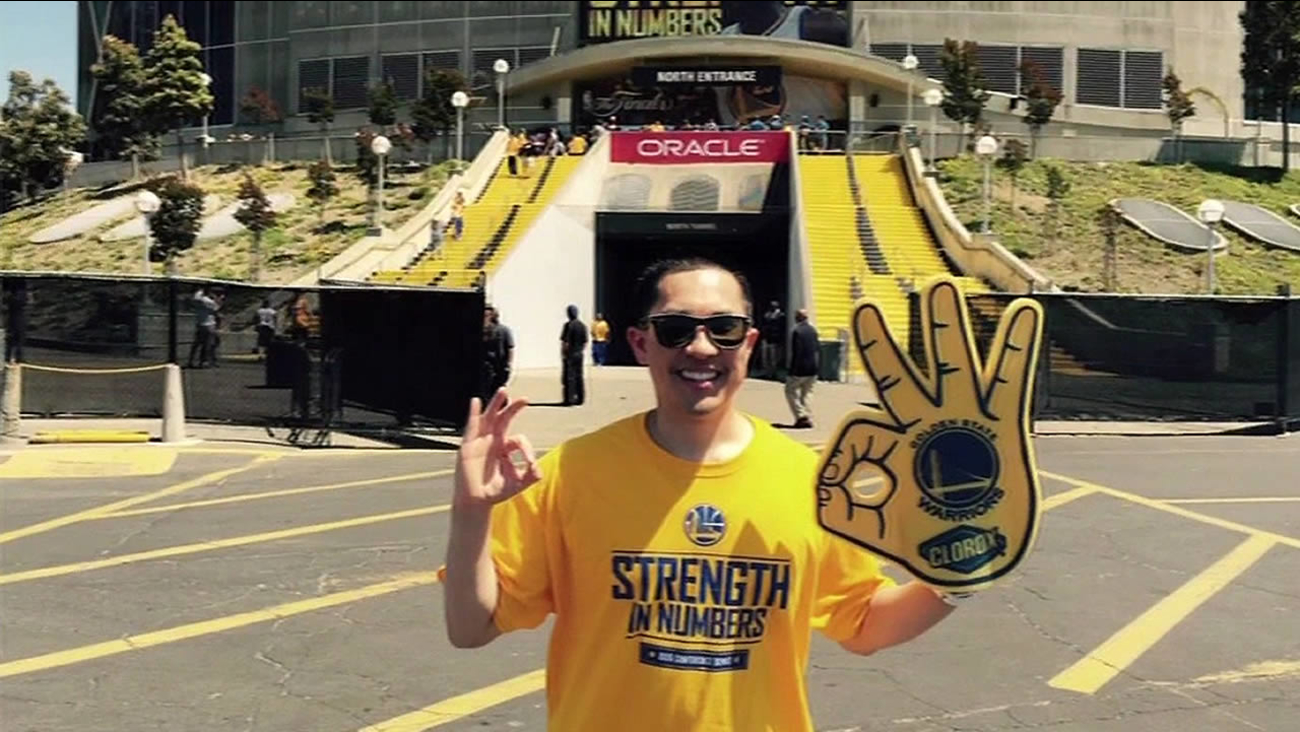 On June 9, 2015, Golden State Warriors fan Henry Yu bought fake tickets on Craigslist and wants to warn others to be careful when buying tickets. ((KGO-TV))

OAKLAND, Calif. (KGO) -- Obviously, Golden State Warriors tickets are a highly sought after item and counterfeiters are taking advantage of the fan fever by selling bargain-priced tickets that turn out to be fake. One die-hard fan thought he was going to Game 2 of the NBA Finals, but found out his tickets were no good.

This fan was so distraught and let down so huge, he broke into tears. He knew he missed out on Game 2 and will never get his money back, but still, he insisted on telling his story to 7 On Your Side just to save others from the same heartache.

Henry Yu's living room resembles the Warriors front office and it's not just for the Finals, it's permanent. He has been a die-hard Warriors fan since he was 12 years old. He even has stuck with them through their worst seasons. So when the team made it all the way to the Finals this year, Yu said he had to be there. However, the tickets were so expensive.

"I just took a chance on Craigslist," Yu said. "It was my first time using Craigslist."

On the site, he found a pretty good deal -- a seller with two tickets that he was selling for just $1,300.

"I met with the guy. I paid cash for the tickets," Yu said.

He met the seller met at a Macy's store. Yu gave the man a wad of cash for the two tickets. The next day, he raced to the big game at Oracle.

VIDEO 7 On Your Side: Warriors super fan gets to go to Game 5 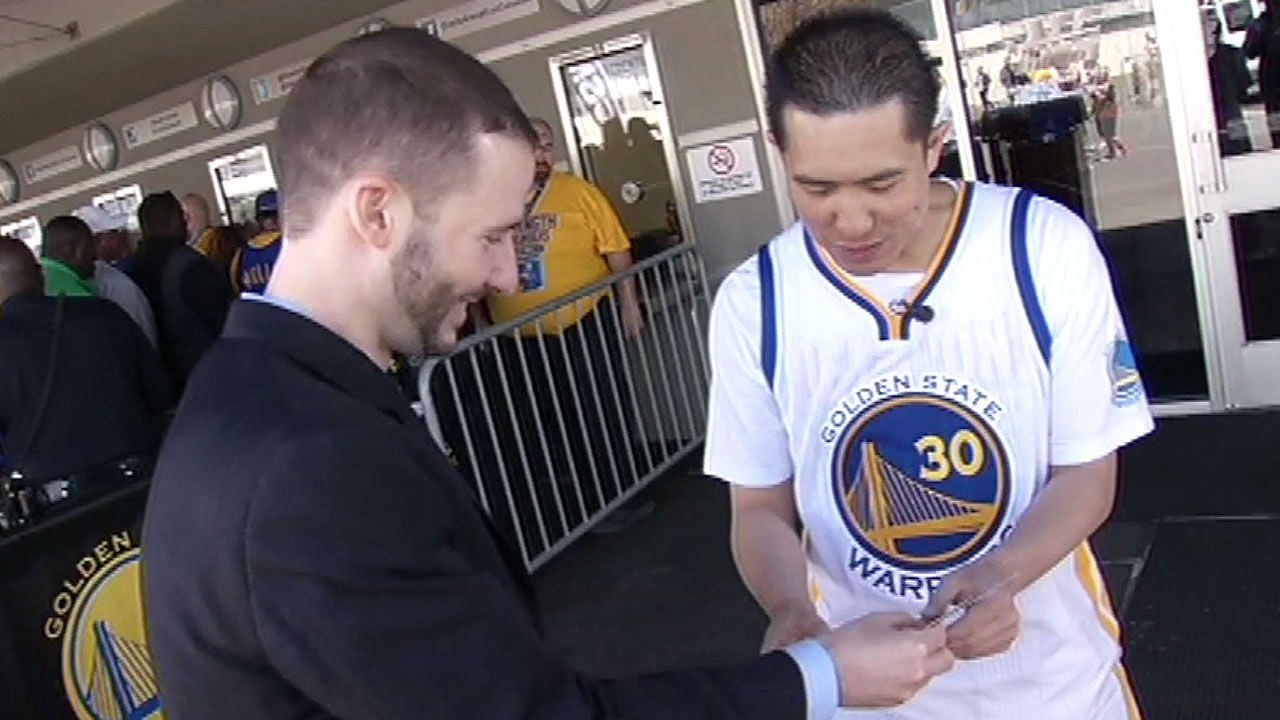 7 On Your Side: Warriors super fan gets to go to Game 5
Last week, 7 On Your Side did a story on a Warriors fan getting cheated out of $1,300 by getting duped by a fake ticket scam. Sunday, he got to see Game 5.

"I was so excited, there was a lot of buzz in the air and I was so excited taking pictures around the stadium, with the trophy," Yu said. "I handed my ticket to the usher, he scanned it, and he said it wasn't scanning."

Yu rushed to the box office and they told him they were counterfeit tickets.

He was shocked because the tickets looked so real. They had a Ticketmaster label and the correct price. The Warriors confiscated the fakes leaving Yu out in the cold.

"For me to be stuck outside, it was definitely very tough to swallow," he said.

He drove to a friend's house, watched the game on TV and what's worse is the Warriors lost. He said it was a really tough day for him.

Soon after it happened, Yu talked with 7 On Your Side by Skype from his Central Valley home. He was overcome with emotion as he recounted the crushing letdown.

"He took away not only my money, but also an opportunity of a lifetime for me as a Warriors fan to go to the NBA Finals," he said.

Yu later met with 7 On Your Side in person saying he just wanted to warn others so others don't get scammed like he did. He hopes other fans don't experience the same kind of pain and suffering that he went through.

Yu said his judgment was clouded because he wanted the tickets so badly.

The seller insisted on getting cash which is a big red flag. So if you're looking for tickets for Game 5 or 6 of the NBA Finals, don't buy from strangers. Instead, purchase them from a legitimate site like Ticketmaster or Warriors.com. Those companies will guarantee seats or reimburse you if a counterfeit ticket slips through.
Related topics:
sportsoaklandsan francisconba playoffsnba finalsnbacraigslistgolden state warriorsscams7 on your sidescamconsumercounterfeitconsumer concernsticketmaster
Copyright © 2021 KGO-TV. All Rights Reserved.
RELATED
7 On Your Side: Warriors help heartbroken victim of scam
7 On Your Side: How to spot fake Warriors gear
7 On Your Side looks at rising price of Warriors memorabilia
SF police on the lookout for fake tickets at Candlestick
7 ON YOUR SIDE
7 On Your Side investigates calamity at California EDD
Can you afford to voluntarily quit your job?
EDD sending 'conditional payments,' but critics still skeptical
Why you may want to opt out of monthly Child Tax Credit
TOP STORIES
Amazon driver tracks down Vallejo man's stolen truck
SF 'exploring' NYC-type vaccine mandate
72,000 US kids caught COVID last week, a 'substantial' spike
Santa Clara Co. expanding COVID testing as demand spikes
CA reservoir levels reach record lows not seen since 1977, DWR says
Air quality advisory issued in Bay Area due to wildfire smoke
Olympic gold medalist to buy food truck for her mom
Show More
11 killed, 13 injured when van crashed into pole near border, DPS says
Body of missing runner found in Pleasanton
7 On Your Side investigates calamity at California EDD
LA to consider requiring vaccine to enter public indoor spaces
Police to increase patrols at Walnut Creek Nordstrom due to theft
More TOP STORIES News