8 stabbed, hit by vehicle or otherwise hurt at Ohio State 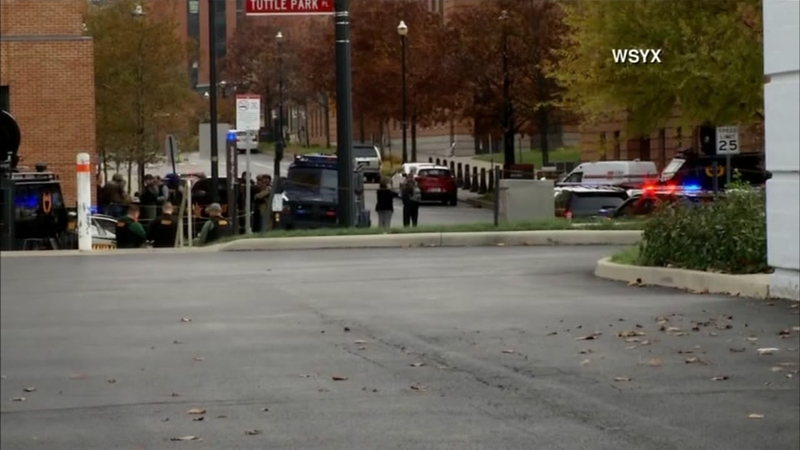 COLUMBUS, Ohio -- At least eight people were stabbed, hit by a vehicle or otherwise injured in an attack Monday on the Ohio State University campus, and a suspect was shot to death, school and hospital officials said.

Ohio State police say the attacker on campus purposely drove over a curb and into pedestrians and then got out of the vehicle and began stabbing people with a butcher knife.

Police gave no immediate details on a possible motive for the attack.

The details started to emerge after a morning of confusion and conflicting reports that began with the university issuing a series of tweets warning students that there was an "active shooter" on campus near the engineering building and that they should "run, hide, fight." Numerous police vehicles and ambulances converged on the 60,000-student campus, and authorities blocked off roads.

The shelter-in-place warning was lifted about an hour and half later, and university spokesman Ben Johnson issued a statement that made no mention of any gunfire other than the shooting of the suspect, who he said was killed. The injured were stabbed, hit by a vehicle or suffered other injuries, Johnson said.

A law enforcement official said the suspect is believed to have struck people with a car before beginning to stab victims. There was no indication that the suspect shot anyone, said the official, who was not authorized to publicly discuss the continuing investigation and spoke on condition of anonymity.

Rachel LeMaster, who works in the engineering college, said a fire alarm sounded before the attack.

"There were several moments of chaos," she said. "We barricaded ourselves like we're supposed to since it was right outside our door and just hunkered down."

LeMaster said she and others were eventually led outside the building and she saw a body on the ground.

Cassidie Baker, an Ohio State senior, said she saw police or paramedics helping one person on the ground outside Watts Hall, a materials science and engineering building.

"No one really knows what is happening, other than there's an active shooter," she said.

After the active shooter warning was lifted and the university declared the scene secure, the school said all classes would be canceled for the rest of the day.

"Run, hide, fight" is standard protocol for active shooter situations. It means: Run, evacuate if possible; hide, get silently out of view; or fight, as a last resort, take action to disrupt or incapacitate the shooter if your life is in imminent danger.