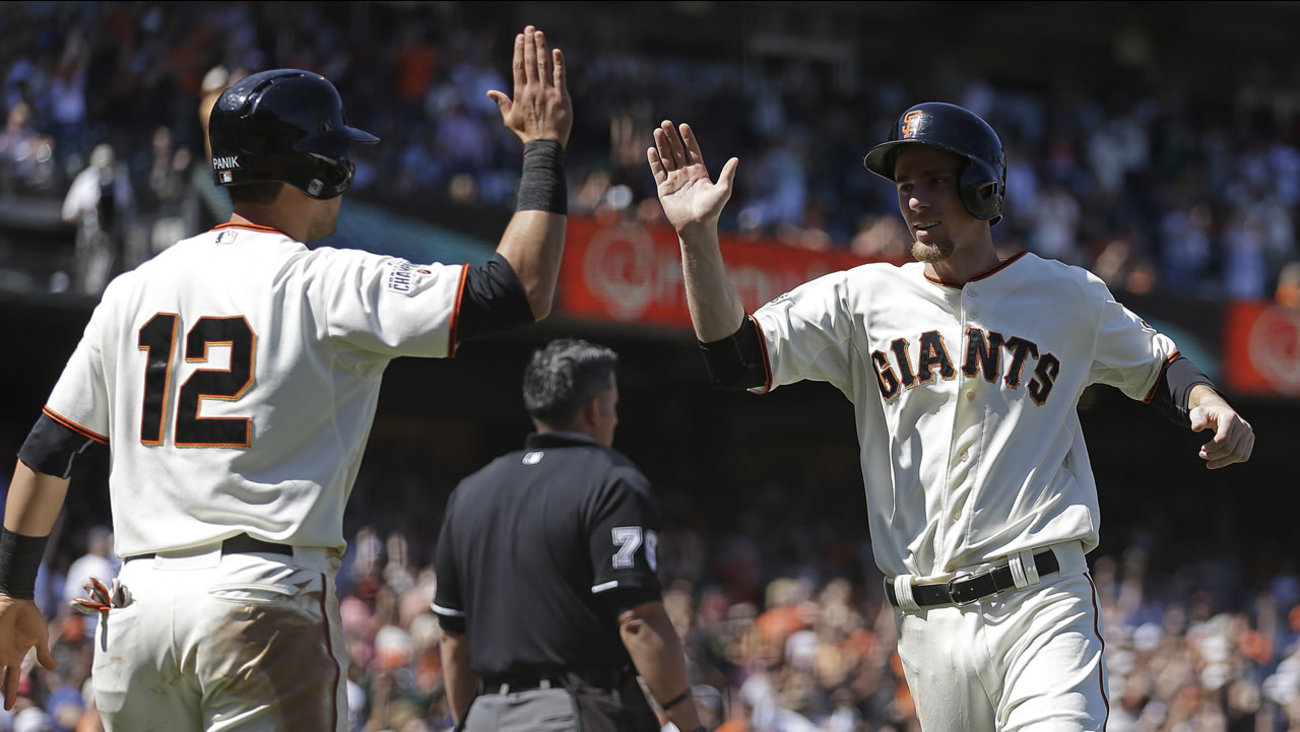 SAN FRANCISCO -- The Giants hit four triples in a game for the first time in 55 years, including a pair by Brandon Belt in a 13-8 win over the San Diego Padres on Thursday.

Brandon Crawford and Matt Duffy also tripled for San Francisco, which had not tripled four times in a game since Sept. 15, 1960, when Willie Mays hit three of them and Eddie Bressoud had one at Philadelphia's Connie Mack Stadium.

The Giants had not accomplished the feat at home since Hack Wilson and Ross Youngs had two triples each against the Boston Braves at New York's Polo Grounds on June 28, 1924, according to STATS.

Buster Posey and Gregor Blanco each had three RBIs for the Giants, who built a 7-0 lead by the sixth and won for the fifth time in seven games, San Francisco has won consecutive home games for the first time since May 28-29.

Will Middlebrooks tripled for the Padres.

Chris Heston (8-5), who pitched a no-hitter at the New York Mets on June 9, won for the third time in four starts. He gave up two runs and five hits in seven innings, struck out six and walked one.

James Shields (7-2) allowed seven runs - his most since June last year - and nine hits in four-plus innings, his shorted outing this season.

San Diefo closed to 9-8 with a six-run eighth, when Matt Kemp hit a two-run homer and four pinch hitters reached base.

Sergio Romo got two outs but consecutive singles by Alexi Amarista and pinch hitter Brett Wallace drove in runs. Solarte singled in his second at-bat of the inning to cut the deficit to one run before Romo retired Barmes on a popout.

Padres: Right-hander Brandon Morrow played catch on Tuesday and is expected to throw a simulated game in the next few days before possibly starting a rehab assignment.

Giants: Right-handers Matt Cain (Thursday) and Jake Peavy (Friday) are to makes what are slated to be their final rehab starts. Both are expected to join the Giants on their trip to Miami and Washington, with targeted dates of July 2 and 3 for their returns.

Padres: Tyson Ross (4-7) starts at home against Arizona on Friday night. Ross threw a complete game against the D-backs in his last start, a four-hitter in which he struck out a season-best nine.