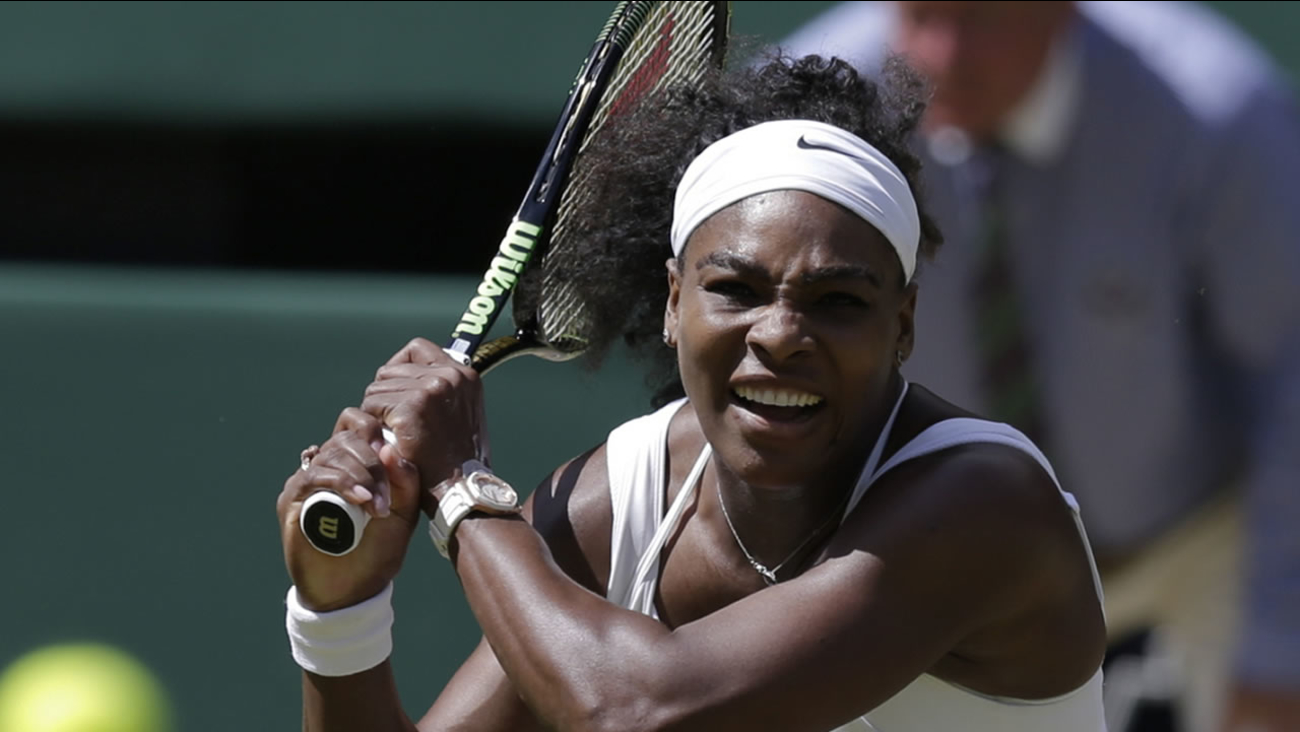 LONDON -- When her opponent's final shot sailed out, Serena Williams wasn't sure whether the match was over or not. It took a few seconds before the realization sunk in - not only had she won her sixth Wimbledon title, but her bid for another "Serena Slam" was complete.

Williams overcame a slow start, eight double-faults and a nervy finish to dispatch Garbine Muguruza 6-4, 6-4 on Saturday for her fourth Grand Slam championship in a row and 21st major overall.

The win means Williams holds all four Grand Slam titles at once - completing the second "Serena Slam" of her career. What's more, she secured the third leg of a calendar-year Grand Slam and, if she wins the U.S. Open, will become the first player to sweep all four majors in the same season since Steffi Graf in 1988.

"I can't believe I'm standing here at another Grand Slam," Williams said in an on-court interview after the match. "I'm having so much fun out here. I just never dreamt I would be out here still and let alone winning."

Williams, who won her 28th straight Grand Slam match, is now just one major title behind Graf on the Open era list and three behind all-time leader Margaret Court.

At 33, Williams is also the oldest woman to win a Grand Slam title in the Open era. She has now won eight major championships in her 30s, including her first Wimbledon title since 2012.

"It feels so good," Williams said after accepting the winner's trophy - the Venus Rosewater Dish - on Centre Court from the Duke of Kent. "It's been a little while and you really appreciate holding it."

Williams was broken in the opening game by Muguruza, a hard-hitting 21-year-old Spaniard who was playing in her first Grand Slam final, and fell behind 4-2. But Williams began playing more aggressively and ran off five straight games to take the set and go up 1-0 in the second.

Williams pulled out to a 5-1 lead but seemed to get tight and was broken twice serving for the match.

"It was definitely a little pressure toward the end, but I think Garbine just started playing really well and started hitting some great shots so that made it even harder," Williams said.

Muguruza saved a match point and converted on her fifth break point to draw within 5-4. But Williams then broke at love in the next game to close out the match, which finished in anticlimactic fashion when Muguruza hit a forehand wide.

Neither player seemed to realize the match was over, and there was an awkward delay before Williams covered her face with both hands, then smiled and raised her arms in the air. After the two players hugged at the net, Williams hopped up and down on the side of the court with her arms above her head.

"I didn't even know it was over because she was fighting so hard at the end," Williams said. "I was like, OK, do I have to serve again?"

Muguruza, the first Spanish woman to reach a Grand Slam final in 15 years, was bidding to become the first to win Wimbledon since Conchita Martinez in 1994. Despite losing nine out of 10 games at one stretch Saturday, she dug in and made in tough for Williams.

"I learned that she's also nervous, even though she played I don't know how many finals," Muguruza said. "And she finds the way, being so nervous, to serve, to hit winners. She's world No. 1. That's what I saw today."

The Spaniard established herself as a rising star over the past two weeks and received a standing ovation Saturday that left her in tears.

Williams hasn't lost in a Grand Slam since falling in the third round to Alize Cornet at Wimbledon last year. Since then, she won last year's U.S. Open and this year's Australian and French Opens before completing the set at Wimbledon.

Williams extended her winning streak in Grand Slam finals to eight and improved her overall record in major finals to 21-4, including 6-2 at Wimbledon.

Williams was the last player to win four majors in a row, when she achieved her first "Serena Slam" by taking the 2002 French Open, Wimbledon and U.S. Open and the 2003 Australian Open.

Apart from Graf, only two women have completed a calendar-year Grand Slam - Maureen Connolly in 1953 and Court in 1970. Martina Navratilova also won four straight majors in 1983-84.