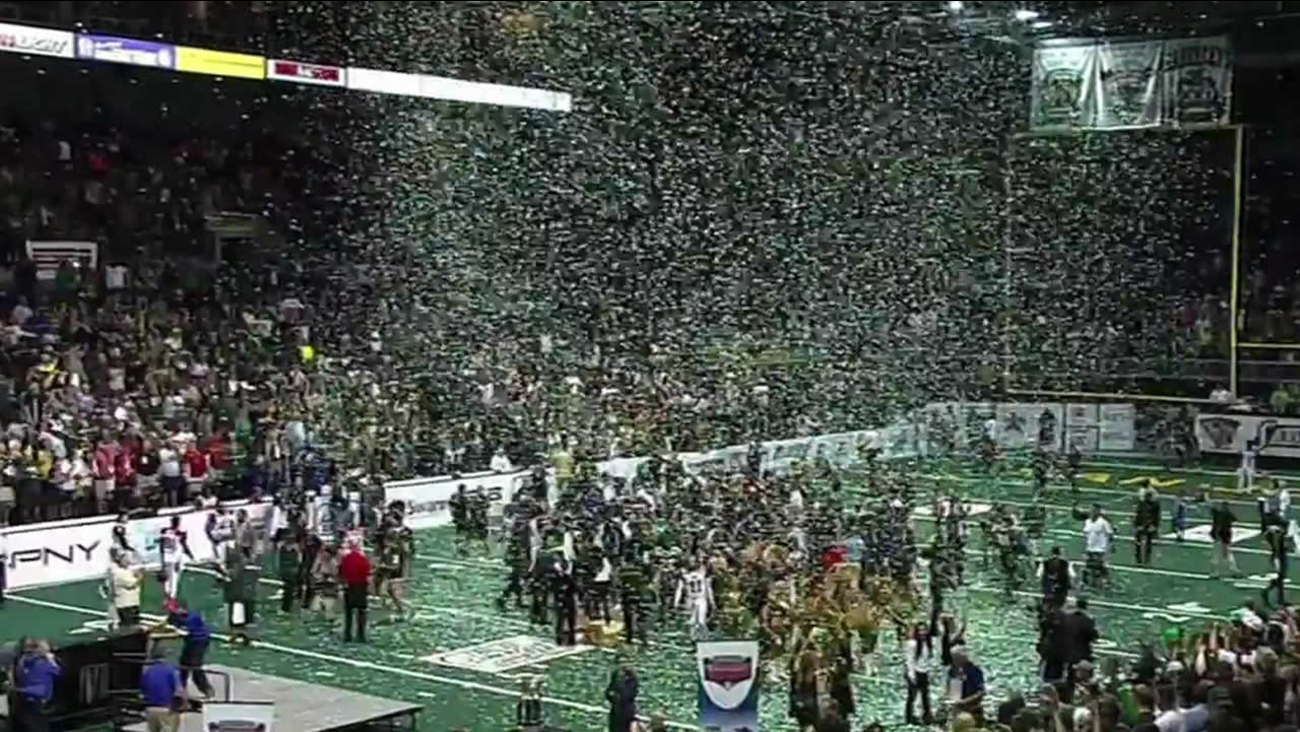 The San Jose SaberCats celebrate their 68-47 victory over the Jacksonville Sharks in the ArenaBowl on Saturday, August 29, 2015, in Stockton, Calif. (KGO-TV)

STOCKTON, Calif. -- Darren Arbet walked through a cloud of confetti at Stockton Arena and pointed with both hands toward 89-year-old mother Clinso in the stands.

The San Jose coach couldn't think of a better way to complete one of the most dominant seasons in Arena Football League history after the SaberCats' 68-47 victory over the Jacksonville Sharks in the ArenaBowl on Saturday night.

Arbet got to share San Jose's fourth league championship in his hometown with family and friends and a sellout crowd of 9,115. The game was moved to Stockton because the SAP Center in San Jose was unavailable.

"I'll never forget this moment," said Arbet, who became the second coach in league history to win four ArenaBowls. "It's special. We won one in San Jose, one in Arizona, one in New Orleans. But for me personally, this is the neatest for me doing it in Stockton. It means everything to me, to be able to do it here with everything Stockton has been through."

Erik Meyer threw four touchdown passes and ran for two more scores as the SaberCats became the first team in league history to finish a season with 20 victories and joined Arizona, Detroit and Pittsburgh-Tampa Bay as the only franchises to win four Foster Trophies.

Trailing by six points at halftime, San Jose (20-1) scored on the opening possession of the second half to take its first lead, then used opportunistic defensive plays to score 21 points in a 2:35 span on the way to building a 61-33 lead early in the fourth quarter.

"This whole season we've been a big second-half team," Meyer said. "We knew coming into halftime that we just had to stay the course. The defense was going to get it and start getting after it, it was just a matter of time. And then we start feeding of them and they start feeding of us."

After the SaberCats took their first lead, they got the big play they'd been waiting for from the AFL's top scoring defense on Jacksonville's next series.

With Tommy Grady throwing from near his own goal line on fourth-and-29, his pass was tipped at the line and intercepted by linebacker David Hyland, who returned it 10 yards for a touchdown and 41-33 San Jose lead.

San Jose then forced and recovered a fumble on the next play from scrimmage, and two plays later Meyer found Darius Reynolds in the back of the end zone with a 9-yard scoring pass. On the ensuing kickoff, Ken Fontenette recovered a bar ball that hit the Jacksonville goal post and bounced back into the field of play, returning it five yards for another San Jose touchdown.

Jacksonville never could recover from that three-minute momentum swing despite the play of Grady, who threw for 310 yards and seven touchdowns. Joe Hills had nine receptions for 133 yards and four touchdowns for the Sharks.

"That 28-point swing there to start the third quarter, when those things happen in these types of games, it really makes it tough," Jacksonville coach Les Moss said. "San Jose's a great team, and if you don't play the kind of football you need to play and the Arena games bites you like that, you're going to lose."

Reggie Gray, the AFL's Wide Receiver of the Year, had nine receptions for 95 yards and four touchdowns for San Jose, which twice built a 28-point lead in the final quarter.