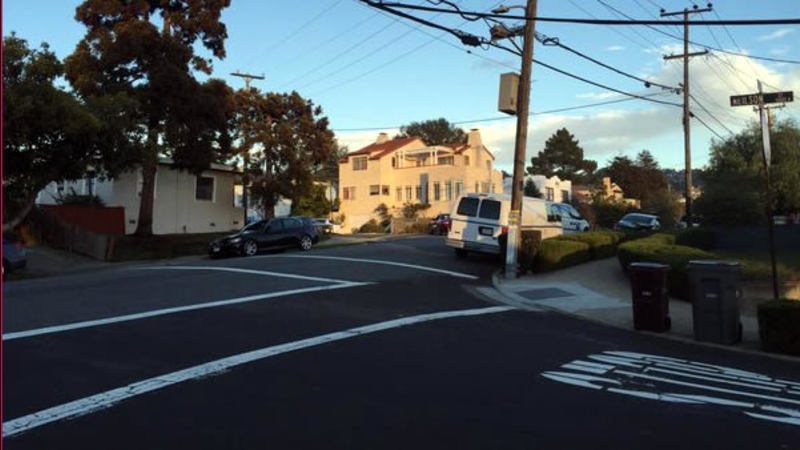 ALBANY, Calif. (KGO) -- Albany police are looking for a man who they say tried to kidnap a teenage girl last night. It happened near the intersection of Neilson Street and Sonoma Avenue near the Berkeley border.

The girl screamed for help and fought back, actions that helped her get away and scare off the man who tried to kidnap her.

"Screaming, like screaming at a tone like she was screaming for her life," said Sang Rowand, Albany resident.

The girl was crying for help at 11 p.m. Saturday night in an Albany neighborhood. Police say a teenage girl was walking alone on Neilson Street when a man next to a white pick-up truck approached her.

"He said come here I want to talk to you and she said, 'no I don't think so.' And he said, 'no come here' and then he approached her and grabbed her," said Theresa Agate, neighbor.

Agate lives a few houses down and helped the victim after she managed to get away. She says the perpetrator threw the girl to the ground and dragged her before fleeing in his pick-up truck.

"When she got here you could see her left leg and knee were pretty badly torn up because she had been dragged along the pavement so we brought her in and called the police," said Agate.

This is just the latest attempted kidnapping in the area in recent months. Several others have been reported in nearby Berkeley since September. At this point, police have no information that this latest case is connected.

Maas lives right around the corner and, like everyone else in the neighborhood, is shocked. The worst neighbors have seen in terms of crime has been the usual car break-ins, not attempted kidnappings.

"I may not let my son walk home from Gilman Street which he goes to at night and walks home that late," said Sarah Ridge, Albany resident.

As for the teenage girl, neighbors are relieved that she escaped and applaud her for fighting back.

"I'm really proud of her for doing that, but she could have been really bad if they had gotten her into the car," said Agate.

Albany police say the suspect's vehicle was said to be in good condition with items, including some lumber, in the bed of the truck. The suspect is believed to have fled in the passenger's seat. Another man was behind the wheel.