KGO
By Wayne Freedman
COTATI, Calif. (KGO) -- A major effort took place in Cotati on Thursday to pick up and move to safety a rare albino redwood tree.

It was almost too painful and dramatic to watch -- a transplant operation in public and broad daylight.

People transplant trees all the time, but this one is 50 feet tall, weighs 45 tons, and has earned a special place in the heart of Cotati, California.

"I didn't know till I read it in the paper," resident Al Mills said.

"No, it's not just a tree. It's a very rare chimeric albino redwood, one of very few in the whole world," tree advocate Prue Draper said.

"It's got male and female, both on the same tree," Mills said.

"It is the same tree with two sets of genetic programming," arborist Tom Stapleton said.

Though in Cotati, the confusion began only after the future SMART Train commuter failway planned a route and laid down track that threatened the tree, and turned it into a cause.

"It's because it represents something unique and wonderful," resident Liz Barbour said.

The new railroad had a public relations problem on their hands, so they raised $150,000 dollars in funds and donations.

After weeks of study and preparation, it was time for the transplant, which made a great photo opportunity. 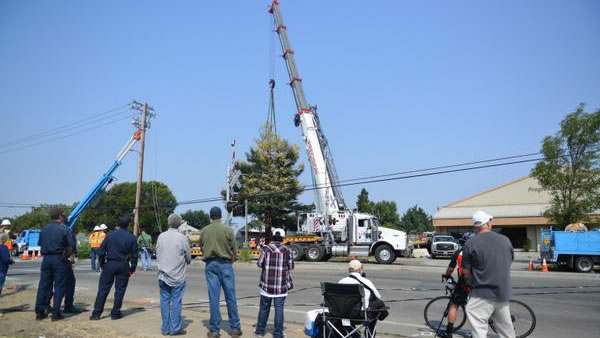 "Didn't you think it was beautiful?" resident Sunny Lockwood asked.

Sure. A giant, freaky tree being hoisted high over power lines and lowered onto a flatbed truck en route to a new hole on railroad property, not far away but far enough?

"I think this is going to be something that scientists are going to be studying, neighbors enjoy, and hopefully will survive," SMART General manager Farhad Mansourian said.

The tree has a great chance of living for many years to come.
Related topics:
cotatiphotosnaturesonoma countyphotophotography
Copyright © 2020 KGO-TV. All Rights Reserved.
More Videos
From CNN Newsource affiliates
TOP STORIES