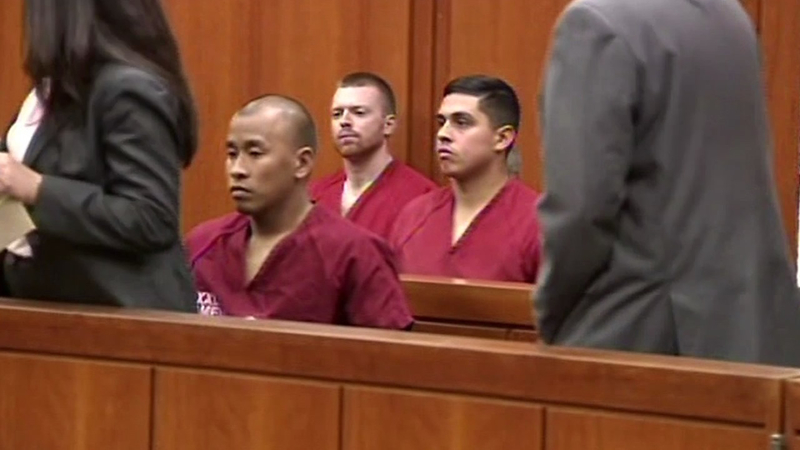 At the Santa Clara County Hall Of Justice, there were tense moments as three correctional officers waited to learn if they'd be free on bail. They were in handcuffs, wearing red jumpsuits, and the courtroom was filled with their family and friends.

Matthew Farris, Jereh Lubrin and Rafael Rodriguez are charged with homicide, in the death of inmate and assault under the color of authority and conspiracy.

Prosecutor Matthew Braker, from the Santa Clara County District Attorney's Office, argued for keeping the men in jail, saying the court should consider public safety and to assume charges against the men are true.

"Now what does that mean in the context of this case? That means that these defendants beat a human being to death," Braker said.

The district attorney's office also argued if the judge was going to set bail, it should be for $10 million, because of the violent nature of the alleged crime and the possibility the men could be sentenced to life in prison if convicted. Defense attorneys argued for bail between $100,000 and $200,000, saying the defendants have strong ties to the community, and are not a threat to the public and are not a flight risk. In the end, the judge said because of the seriousness of the charges, a high bail was required and set it for $1.5 million each.

The judge also said the prosecutor did not provide enough evidence that these men are a threat to public safety. Defense attorneys were relieved by the judge's decision.

"We're very grateful that the court took into consideration everything that we had to say, and did what was right, and upheld the Constitution," Judith Odbert, Lubrin's attorney, said.

The district attorney's office has pointed to incriminating text messages between two of the three defendants, who allegedly wrote about assaulting other inmates one month prior to Michael Tyree's death.

However, Farris' defense attorney said, "I can tell you that both in the jail setting, and in the emergency medical setting, people say a lot of things. It's called gallows humor, so you can't take it out of context, which is what has happened."

The Tyree family released a statement through their attorney saying, "The ongoing tragedy is that Michael, and the other inmates assaulted by the defendants were not so fortunate to have the resources to post bail. They were left at the mercy of these officers, who had none."

At this point, defense attorneys are unsure of whether their clients will be able to post bail -- they'll be back in court on Sept. 28 to discuss their options with the judge.

An attorney from the public defender's office was in the courtroom observing the proceedings and spoke exclusively to ABC7 News.

"As public defenders we naturally don't want to see anyone in jail. However, the irony of these individuals asking to be let out of a setting in which they clearly seem to take such delight making unsafe for our clients was not lost on us," Public Defender Roderick O'Connor said.

"I don't think the bail should be at the level she set it for. I think it's entirely too high in my view. But I think she was very thoughtful in her approach with this issue with the kind of political pressure that's going on right now for her to make that decision. I applaud her for that. I just think we're going to have a tough time trying to reach that level," said defense attorney Bill Rapoport.