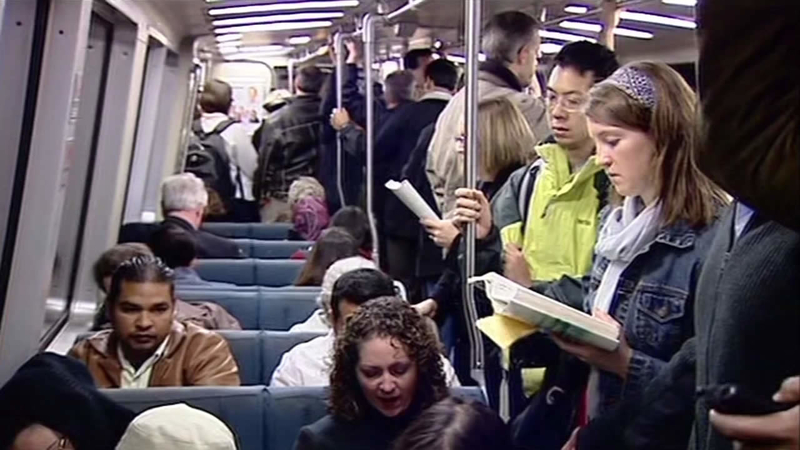 SAN FRANCISCO (KGO) -- Health officials in two Bay Area counties are putting out an advisory, letting thousands of people know that they may have been exposed to the measles virus. The biggest concern is to those who ride BART between the Lafayette and Montgomery Street stations.

It was exactly one year ago that a UC Berkeley student rode BART several times in one week and later found out he or she had measles. In that case, no one got the disease. Health officials hope the same thing happens this time.

It's BART's busiest line during commute hours -- the trip between Bay Point and San Francisco serves 25,000 people during the morning alone.

And now, according to health officials in Contra Costa County, a person with an active case of measles was in those crowded cars on six occasions last week.

"We determined that this individual traveled on BART during the infectious period," said Erika Jenssen with Contra Costa Public Health.

The infected person boarded BART trains in Lafayette last week, three days in a row, during the morning and evening commutes. He or she exited at the Montgomery Street station in San Francisco and went to work at LinkedIn's offices on 2nd St.

Hani Durzy, director of LinkedIn's corporate communications, issued a statement on Wednesday: "On Tuesday, Feb. 10, we were informed that an employee based in our San Francisco office was diagnosed with measles. We are working very closely with the San Francisco Department of Public Health, and following their recommended protocol for managing this situation. The health and well-being of our employees is our absolute top priority, and we will take whatever steps are advised to ensure their safety and the safety of the general public."

Health officials have released the following timeline for the BART travel -- the individual was on BART between 6 a.m. and 8 a.m. from Feb. 4 through Feb. 6. and then returned from San Francisco to Lafayette each of those evenings from 7 p.m. to 9 p.m.

"That line is our busiest line and what's called the shoulders of the commute, right after 9 a.m., those trains are distributed elsewhere in the system," said BART spokesperson Alicia Trost. "So there is a possibility that even if you rode, say the Richmond line, that you may have been on the exact same train this person was on."

The infected person also spent some time at the E&O Kitchen and Bar on San Francisco's Sutter Street last Wednesday between 5:30 p.m. and 7 p.m. Health officials say the measles patient is recovering at home and will remain isolated for 21 days.

The state health department is now reporting 110 measles cases in California, and only about a third of them are the result of the Disneyland outbreak.

Including the one now reported in Contra Costa County, there have been 15 cases in the Bay Area. Six in Alameda County, three in San Mateo County, two each in Marin and Santa Clara counties, and one in Solano County.

The first symptoms of measles are fever, runny nose, cough, red eyes, and sore throat. You might also feel very tired. Then you'll get spots in your mouth followed by a rash all over. It usually takes 7 to 18 days for the symptoms to appear once you've been exposed.