SAN JOSE, Calif. (KGO) -- An exclusive I-Team investigation earlier this year uncovered a Los Gatos couple that faces charges for sexually abusing their adopted son. And now, the victim is speaking out for the first time.

A civil lawsuit was filed Tuesday by Denis Flynn against his adoptive parents Ralph and Carolyn Flynn. It outlines 10 years of sexual abuse. He tells ABC7 News wants to be a voice for other survivors.

In addition to crim case, there is now civil litigation pending. Denis Flynn says he wants to be a voice for other sexual abuse survivors

In 2000, a little boy from Russia named Denis was given what he now says he thought was a second chance.

"I had lost everything," he explained. "Especially with being an orphan. And this was my way of living again."

ABC7 News profiled the story of Russian orphans and the couple who soon became Denis' parents.

.@abc7newsBayArea profiled Denis' adoption in 2000. Of that time he told me it was "a second chance." Says abuse began "within a few months"

"We became very interested in the possibility of adoption," said Ralph in an interview from 2000.

According to court records, Denis told law enforcement that Ralph Flynn began abusing him shortly after he arrived in the U.S. when he was 9 years old.

"There was a lot of fear because I had just gained something that I believed was a gift," he said.

According to Denis, Carolyn joined in when he was 15.

After 10 years, Denis attempted to report the abuse. He says he called 911.

Denis says because he was older than 18 his report was brushed aside.

"I did exactly what I learned to do just bury it and go on with my life," he said.

A psychologist who is a mandated reporter also called the Santa Clara County Sheriff's Office.

In January, Sheriff Laurie Smith told the ABC7 I-Team, "We will examine how this initial report was handled."

A sheriff's office spokesperson now says the department has addressed it internally. In an emailed statement, Sgt. James Jensen said:

"We are always looking for ways to improve our investigations. We looked into how the 2012 case was handled, and we have addressed that internally. We are pleased that our detectives ultimately led the investigation that resulted in the arrests of these two suspects."

Ralph and Carolyn Flynn's attorneys declined to comment in the criminal matter due to court orders. Both said they may not be representing their clients in the civil litigation.

After Denis says his report of abuse was brushed aside he says, "I did exactly what I learned to do just bury it and go on with my life."

Attorney Wesley Schroeder, who is representing Carolyn Flynn in the criminal matter, said via email, "We fully intend to pursue the appropriate procedures and processes of the court to assure due process and a fair and impartial evaluation of the case as to my client. We will not be commenting on the particulars of the case."

"Now is the time to make it right," said Denis.

To sexual abuse survivors Denis says, "it's not your fault, find the courage within to speak out to someone you trust."

"As I told my truth I realized I got more strength and integrity," he said.

He says he's sharing his story now to be a voice for other sexual abuse survivors.

Carolyn Flynn made her $525,000 bail. Ralph Flynn is being held at Santa Clara County's Elmwood Jail on $2.5 million bail.

A GoFundMe page has been set up to help Flynn. Click here if you'd like to make a donation.

To adults/caregivers/professionals/law enforcement he says, "even if it's just a hunch, go on that hunch."

I reached out to the criminal defense attorneys for Ralph & Carolyn Flynn. There is a gag order in that case precluding them from commenting 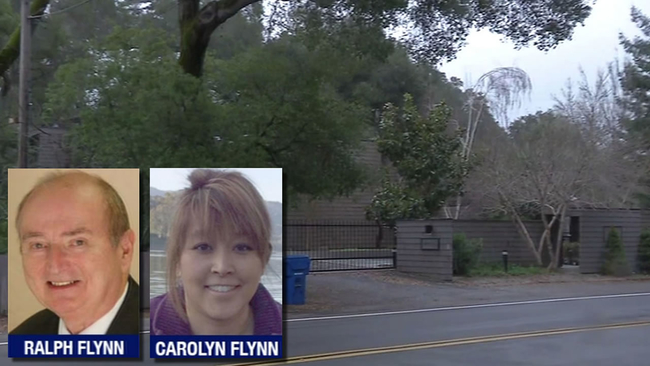