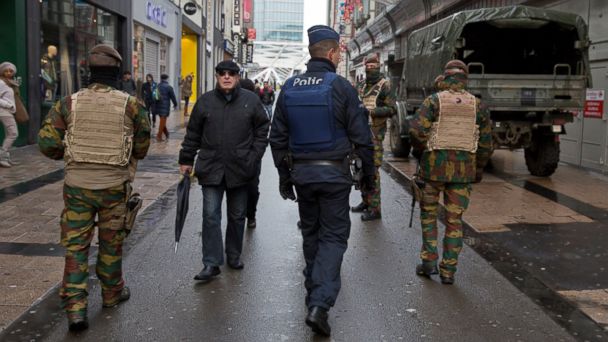 Belgian authorities are looking for "one and more individuals with weapons, explosives," the vice prime minister said this evening, as the country raised the terror alert to the highest level for the capital.

"The threat is imminent, precise, we're talking about possible attacks by several individuals, heavily armed, so obviously in parallel we are looking for one and more individuals with weapons, explosives," Vice Prime Minister Dider Reynders said on Belgian television RTL.

"An investigation is ongoing and we can't say more, we must avoid disrupting it," he said. "What I can say is that there's a real threat and that's why we raised the level to 4, and why we've taken security measures. Investigators are looking for individuals who have the capability of committing such attacks."

The Belgian crisis center said it raised the terror alert for the Brussels region to a level 4, while a level 3 remains in place for the rest of the country.

NATO said it raised the security level at its Brussels headquarters following the Paris attacks, and today, after the Brussels terror alert increase, NATO said its "staff and their families have been recommended to avoid public transport and gatherings."

"We remain vigilant and are taking all necessary measures to ensure the security of our staff and premises," NATO added.

As the hunt in Belgium went on, Turkish authorities said that one of three men arrested there who are accused of supporting ISIS served as a lookout during the attacks in Paris last week that left 130 dead. Officials have said they believe those attacks were planned in Belgium.

The three -- one a Belgian of Moroccan descent and the two others who are Syrian -- were arrested Friday in the southern province of Antalya, officials said. One of the men allegedly served as a lookout during the attacks outside the Stade de France, Turkish police said.

Since the attacks in Paris last Friday, raids have followed in Brussels, where one alleged attacker, Salah Abdeslam, has been hiding out, according to friends who spoke with him. Police have issued an arrest warrant for Abdeslam, who authorities said left Paris after the attacks and returned to his hometown in the Brussels area.

At a news conference earlier today, Belgian Prime Minister Charles Michel said there was a "threat of attacks with arms and explosives that could be launched in several locations at the same time." Michal added the decision to raise the alert level was made based on "rather precise" information.

Heavily armed police and soldiers were on patrol in parts of the capital Saturday morning.

The new threat alert has prompted several recommendations, including avoiding places in areas that have a high concentration of people, such as malls, train stations, and airports. Other recommendations for all 19 municipalities in the Brussels region included canceling large events and soccer matches, while also calling for an increased presence of military and police.

A statement from STIB, the company that operates Brussels' subways, announced that all stations will remain closed Saturday following the crisis center's recommendation. It added that buses were operating but certain train services were interrupted.

In response to the threat level, the U.S. Embassy in Brussels urged American citizens to "shelter in place and remain at home," according to a statement from the embassy.

"It is important that everyone remain cognizant of their personal safety and security at all times," read the statement.