KGO
By ABC7 News staff
BERKELEY, Calif. (KGO) -- Protests over a grand jury's decision to not indict a police officer in the choke hold death of Eric Garner turned chaotic Sunday night in Berkeley and Oakland. Police told shop owners Monday to prepare for another night of damage.

Five people were arrested last night in Berkeley's protest. Nearly all of the windows were broken at the McDonald's at Shattuck Avenue, just one of several businesses that were damaged overnight. Protesters also set fires in the streets. Police were busy trying to put out the fires before they spread. There was dissension in the group, while some turned violent, others yelled for them to stop. The violent agitators broke windows and looted stores, including a Radio Shack where there was a fight between protesters who tried to stop others from looting.

A medic helps a demonstrator who tried to stop looting at the Radio Shack on Shattuck. #berkeleyprotests pic.twitter.com/Fkz3am8HSh

While it appeared police were taking a hands-off approach, some protesters complained of rubber bullets and batons being used.

"I tripped over a woman who had fallen down, and I stopped to help her, my back was to the police line and I was lifter her up I looked over my shoulder and saw the officer raise his baton," protester Cindy Pincus said.

In Oakland, eight people were arrested and two CHP officers were injured during protests on Highway 24. The two officers suffered minor injuries during the confrontation, but they were not transported to the hospital.

Officers made contact with the protesters about 9 p.m. as the protesters blocked eastbound lanes of state Highway 24 in Oakland. At one point, the Claremont off-ramp to the highway had to be closed due to the protests. Officers confronted protesters in riot gear and used tear gas during the confrontation.

The CHP reported five patrol cars sustained broken windows and dents during the protests. Officers said protesters tried to light a patrol car on fire and threw rocks, bottles and concrete at officers.

This is one of the #CHP patrol vehicles damaged by the protestor group this evening. pic.twitter.com/8Z1DSUY0oC

Check out the shattered windows at this Berkeley at McDonalds from last night's protest. This is one spot of many. pic.twitter.com/xCvbkkbUJb

Crews boarded up a Radio Shack on Shattuck Avenue after demonstrators smashed the store's windows.

At least a half dozen buildings in the area are either partially or completely boarded up including a McDonald's, two Chase banks and a Wells Fargo bank. The protesters seemed to target big national companies.

It started as a peaceful protest that split off into a splinter of groups that began a spasm of destruction, shattering windows up and down the street that occurred mostly on Shattuck Avenue and some on Telegraph Avenue and it was causing a major headache for bank customers.

"I think that's stupid, that vandalism because the bank had nothing to do with the shooting or the you know. And when you see the tapes and all the things, some of the people look like their students," David Arseneau said.

The manager at Cream watched a closed circuit TV system from home and was on the phone with employees who were still inside the shop.

"They were a little freaked out, but I'm just glad that everybody was safe inside. And we're honestly thankful for the protesters who stood outside the store and tried to protect the shop," Tagreed Shamieh said.

Vandals smashed out two picture windows at the student store.

The store director says they'll likely be covering the rest of the widows in anticipation of more protests.

Sergio: "Is it disappointing to have to take so many precautions?"

"It is yeah. We think of Berkeley as a safe place and we interact with people and don't normally feel unsafe or threatened, but unfortunately that's what we have to do right now," student store director Peter Nilson said.

"The cops will come and they will say this is going to happen, this may happen, so protect yourself because we can't look after you as well that," street vendor Robert C. Stockley said.

Everyone ABC7 News spoke with Monday said they are conflicted about what happened this weekend.

"It's unfortunate that there are some people who took it too far and took it in the direction that really doesn't reflect the values of the majority of Berkeley of non-violence and positivity," Nilson said. 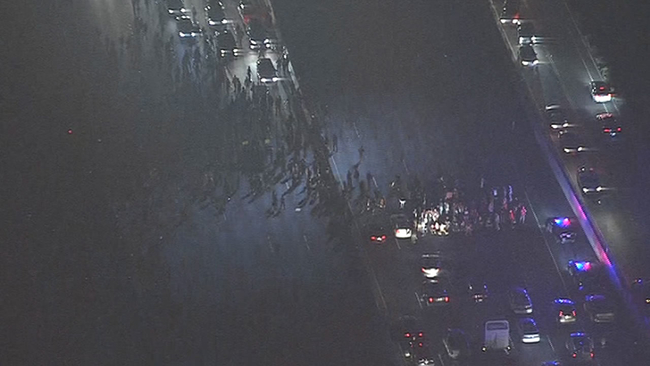 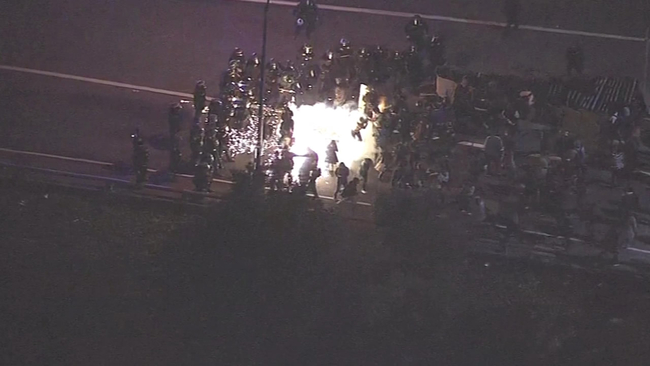 Demonstrators clash with police on Highway 24 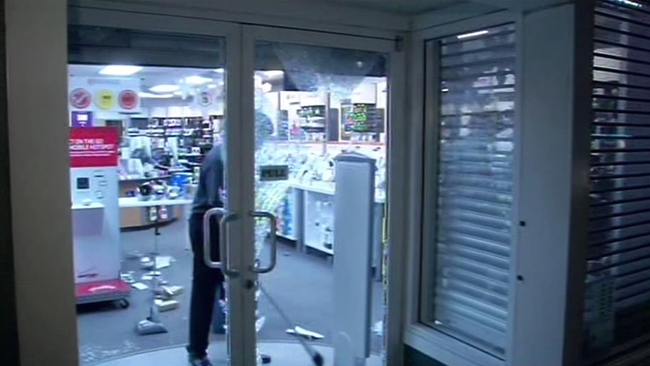 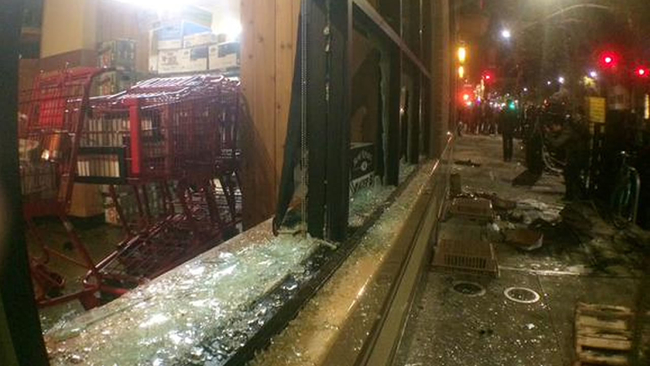 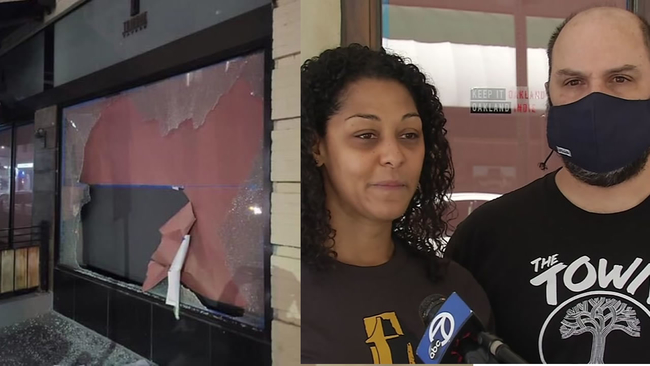