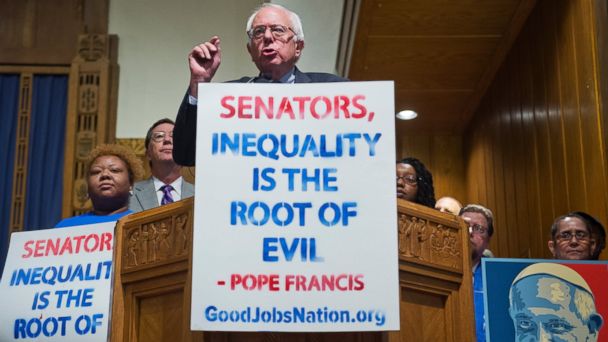 Presidential candidate Sen. Bernie Sanders received a warm welcome from federal contractors striking on Capitol Hill today, telling them at a rally before Pope Francis' arrival in the United States that they have the right to earn $15 an hour and to form a union.

"As we welcome Pope Francis to the United States, I hope that every member of Congress and the president will heed his call for social and economic justice," Sanders said before calling on President Obama to sign an executive order giving federal contract workers $15 an hour.

Sanders spoke highly of the pope after his speech.

"I think he is one of the great moral forces on this earth today and when he speaks out about the injustice of income and wealth inequality ... I think it will have a significant impact," Sanders told ABC News.

Hundreds of federal contract workers from the U.S. Senate, the Pentagon and the Department of Education are on strike today to protest for higher wages and the right to form a union, with the pope scheduled to arrival in Washington this afternoon. Security concerns prevented organizers from staging any protests Thursday, when Pope Francis will address Congress on Capitol Hill.

"That's why we are doing it today, because the pope is coming," union organizer Jaime Molina said. "We want to call him and let him know that the workers need his support and ask him to pray for the poor."

Several contract workers spoke -- in English and Spanish -- about the experience of serving senators while struggling to make ends meet.

"We wear one uniform inside and we leave wearing a different uniform, said Sontia Bailey, who works in Senate food services. "Working in the Capitol is not peaches and cream."

Bailey said she works 70 hours a week with two jobs, and said a recent miscarriage was attributed to her workload.

The day of activity follows a letter 40 Senate workers wrote to the pope earlier this month, requesting an audience with His Holiness.

While they did not get a response from the Vatican, the workers hope the pope will touch on income inequality in his speech.

"I think he's spiritually aware of us," said Charles Gladden, the formerly homeless Senate worker profiled in the Washington Post.