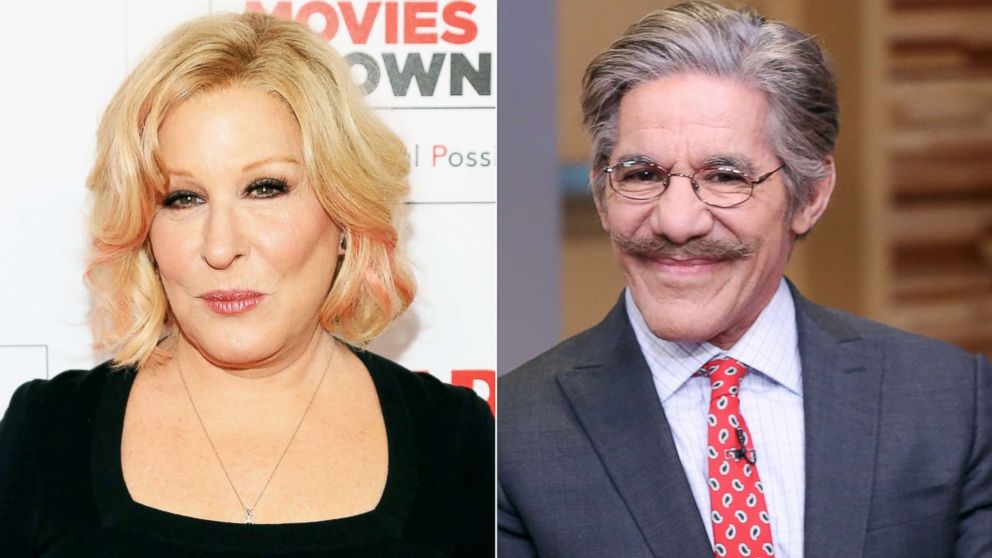 Bette Midler has tweeted a video of an interview she did with Barbara Walters in 1991 in which she said journalist Geraldo Rivera groped her in the 1970s.

The video resurfaced today, a day after Rivera, now a Fox News reporter, defended Matt Lauer after he was fired as a "Today" show co-host over allegations of sexual misconduct.

"Tomorrow is my birthday," Midler wrote on Twitter. "I feel like this video was a gift from the universe to me. Geraldo may have apologized for his tweets supporting Matt Lauer, but he has yet to apologize for this."

Midler concluded the tweet with a #MeToo hashtag, which has become synonymous with speaking out against sexual harassment and abuse.

In the interview, Midler tells Walters, "Geraldo and his producer came to do an interview with me, in the '70s, the early '70s. And this was when he was very, sort of, hot. And he and his producer left the crew in the other room. They pushed me into my bathroom. They broke two poppers and pushed them under my nose and proceeded to grope me."

"Poppers" is slang for the recreational drug alkyl nitrite.

Midler responds, "Groped me. I did not offer myself up on the altar of Geraldo Rivera. He was ... he was unseemly."

Rivera's representative did not immediately respond to a request for comment from ABC News.

In a review of his 1991 memoir, "Exposing Myself," The Washington Post quoted a line from the book, in which he said, "We were in the bathroom, preparing for the interview, and at some point I put my hands on her breasts."

Recently, Rivera came under fire after he called the news business "flirty" in the wake of Lauer's ouster over sexual misconduct allegations. "If News wasn't (formerly) a flirty biz then how do we explain so many newsroom courtships that have led to happy marriages?" he tweeted.

In response to his comments, Fox News issued a statement saying, "Geraldo's tweets do not reflect the views of Fox News or its management. We were troubled by his comments and are addressing them with him."

Rivera later apologized. "Reaction to my tweets today on #sexharassment makes clear I didn't sufficiently explain that this is a horrendous problem long hidden," he wrote.