KGO
SAN JOSE, Calif. (KGO) -- Earth Day has a special meaning in San Jose today. It's the annual banding day for the resident peregrine falcons at city hall where a biologist found out the sex of the three baby birds.

Biologist Glenn Stewart is ready for whatever comes his way 18 stories high at San Jose's City Hall and that includes Clara and Fernando -- the resident peregrine falcons. They are the protective parents of three eyasses, or in less scientific terms, baby falcons.

Stewart has rappelled down into the nest every year since 2007 representing the UC Santa Cruz Predatory Bird Research Group. This morning, he put bands around their tiny legs for tracking purposes. He also revealed they were three little girls delighting the small group of falcon enthusiasts who document the event every year.

Clara has been a productive mother; she has produced 32 babies over the past eight years or so. Stewart says the drought hasn't impacted the falcon population, at least not yet. Food is still available. The fact today's banding came on Earth Day is an opportunity for biologists like Stewart -- to tout just how far the peregrine falcon population has come.

"I think the first Earth Day was 1970 and I think that year we could only find one pair of peregrines in the state. Today there are 200 or 300 pairs out there. The lesson there is we can make a difference," said Glenn Stewart, UC Santa Cruz Predatory Bird Research Group. 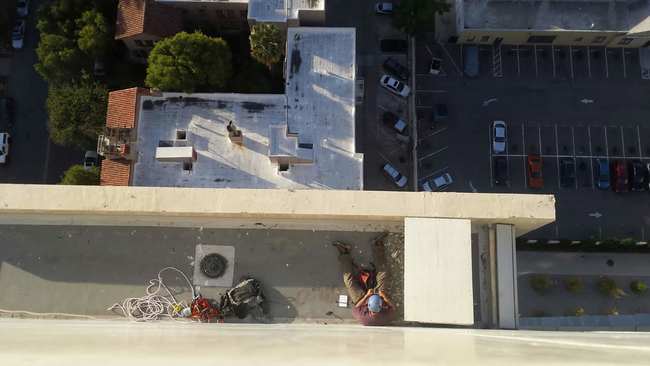