Khamprasong Thammavong, 33, was arrested by Fresno police for charges including felon in possession of a firearm and cultivation of marijuana, on Monday, March 7, 2016. (Fresno Police Department)

KABC
FRESNO, Calif. -- A traffic stop in Fresno resulted in the arrest of a documented gang member on probation, who turned out to have firearms, tactical gear and drugs in his house.

Fresno police said 33-year-old Khamprasong Thammavong was pulled over around 5:40 p.m. Monday in a traffic stop. When the officer learned that Thammavong was a documented member of the Laos Bloods and on probation, he requested assistance from the Southeast Violent Crime Impact Team.

Members from the SV CIT team conducted research on Thammavong's background and found the address of his home, which police said is open to search and seizure. 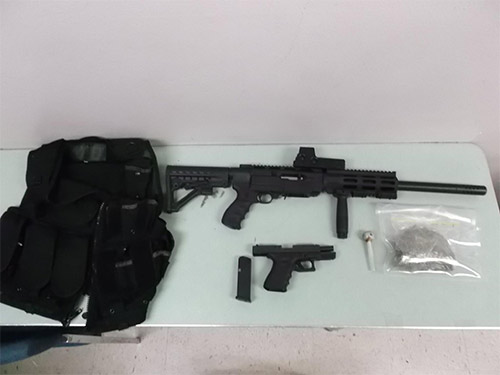 Police said Thammavong did not have a license to possess or grow marijuana in the state of California. The case is being investigated by narcotics detectives.