Blue Angels practice over San Francisco ahead of weekend shows

The Blue Angels are seen flying over San Francisco, Calif. in this undated image. (KGO-TV)

KGO
SAN FRANCISCO (KGO) -- The Blue Angels are practicing above and around San Francisco on Thursday afternoon.

The US Navy stunt pilots are practicing from 1 p.m. to 5 p.m. ahead of three weekend shows as part of Fleet Week.

The Blue Angels will be doing what's called a survey flight during practice.

The Blue Angels are celebrating their 70th anniversary this year, event organizers said.

They will then perform their signature moves Friday, Saturday and Sunday from 3 p.m. to 4 p.m. during the Fleet Week air show.

The weekend air shows are from noon to 4 p.m. over the city's waterfront.


This week's events also include a veteran art exhibit at The Cannery at 2801 Leavenworth St., various performances by the U.S. Navy Pacific Fleet Band at multiple locations, as well as tours of several military ships.

A festival at the Marina Green is scheduled for Friday, Saturday and Sunday from 10 a.m. to 5 p.m.

Fleet Week began in 1981 and takes place every October, attracting thousands of visitors and generating over $10 million in revenue for the city, according to Navy officials.

Click here for information about the multiple events scheduled during Fleet Week. 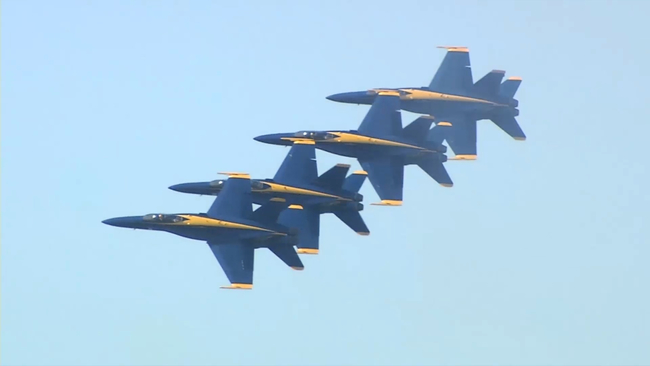