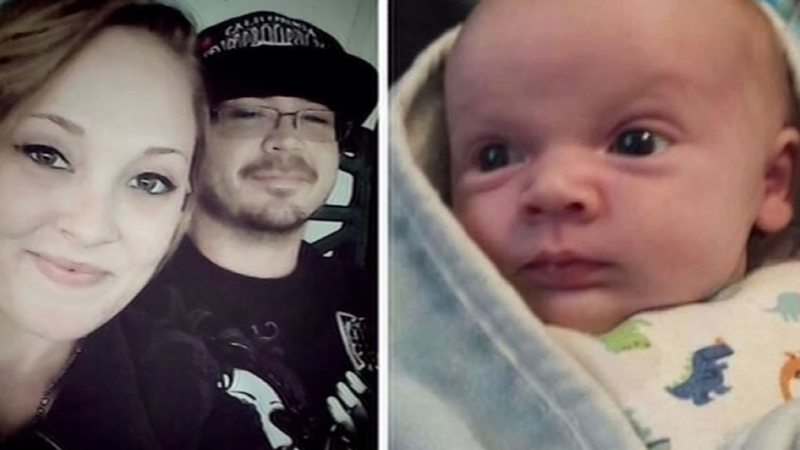 KNIGHTS LANDING, Calif. (KGO) -- Police say the body of a baby found in a swampy area in Northern California Wednesday is that of Justice Rees, a 20-day-old boy who was reported missing Monday.

His family and the community are in mourning after the body of the missing infant was found on the shores of a remote slough in Yolo County. The mother was discovered hysterical on the banks of the same shoreline 24 hours earlier, but so far, police say there's no clear evidence of foul play. An autopsy is set for Thursday morning.

"This touches the soul of every one of us," said Yolo County Sheriff Ed Prieto.

Yolo County Sheriff's office says they will look into all possibilities, including the claim made by the mother of a deceased infant that she and her son were abducted.

"All the information we have form here was sort of hysterical. She was crying, she was emotional. We couldn't get any real valuable information from her," said Prieto.

The family of little Justice Rees could be seen hugging just after word came in that the body of an infant was discovered along the banks of a rural slough in Yolo County.

"He was a good boy. He was only here for three weeks, less than three weeks, he never had a chance," said paternal grandfather Randy Green.

The discovery was made just before 10 a.m. Searchers in a boat had to cut away brush along the shore to recover the body.

It's not far from where Justice's mother, Samantha Green, was found wet and crying Tuesday evening. Mother and son had been missing since Monday.

"This whole house is filled with baby clothes, bassinet, all that stuff," said grandfather Bill Rees.

Rees is his paternal grandfather. The couple and baby lived at his home in Woodland.

"They loved baby Justice. Frank just loved to carry him around at night when he was, he was fussing. Samantha, gosh, I understand she's crushed," said Rees.

"It's like it's not real for me, it's like I can't imagine you know. This whole house is full of baby clothes, bassinet., all that stuff," said Bill Rees.