KGO
By Laura Anthony
OAKLAND, Calif. (KGO) -- A fire destroyed the building on Lester Avenue Monday, there are new details about the owner and a lawsuit over the building.


We're learning some new things about the man who owns the unfinished apartment building that burned up in Oakland Monday morning. It's a lawsuit that predates the fire by two years.

The owner of the unfinished apartment complex that went up in flames, is the object of a lawsuit by several tenants who were evicted from the property two years ago to make room for the now gutted project.

At that time, the plaintiff's in the lawsuit lived in an older home owned by Athan Magganas.

"It's a combination of things. They had a rodent infestation problem that the city of Oakland cited the landlord for. There were other habitability issues such as a lack of heat," said attorney Michael Bracamontes. "There were leaks during the rainy season. There was mold in the unit."
Th
Last year the tenants filed a lawsuit alleging Magganas used aggressive and illegal tactics to evict them and then retaliated against the tenants by starting to demolish the home while they were still in it.

RELATED: Owner of Oakland building that caught on fire was in legal trouble

When asked if the fire had anything to do with his father's prior business Peter said, "Absolutely not. He works very hard and always has. He puts his heart and soul into his work and i'm mostly very sad for him."

"It's a terrible loss, absolutely. It's a tragedy. We've been working here for a year and a half, trying to improve this property," said building owner, Athan Magganas. We have these nice beautiful buildings all of the sudden it goes up in flames. I mean what can you make of it?"

When asked about the conflicts with tenants he said, "We have a very good report with all of our neighbors." 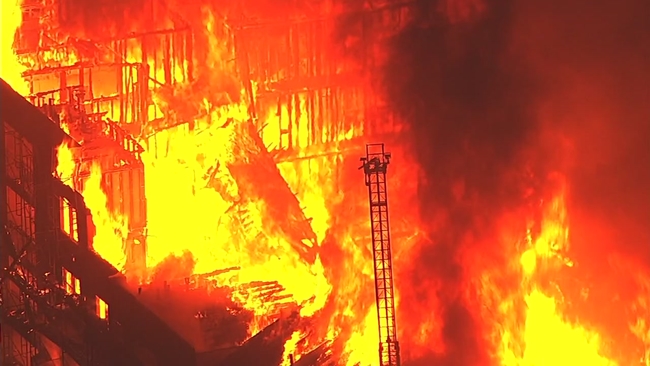