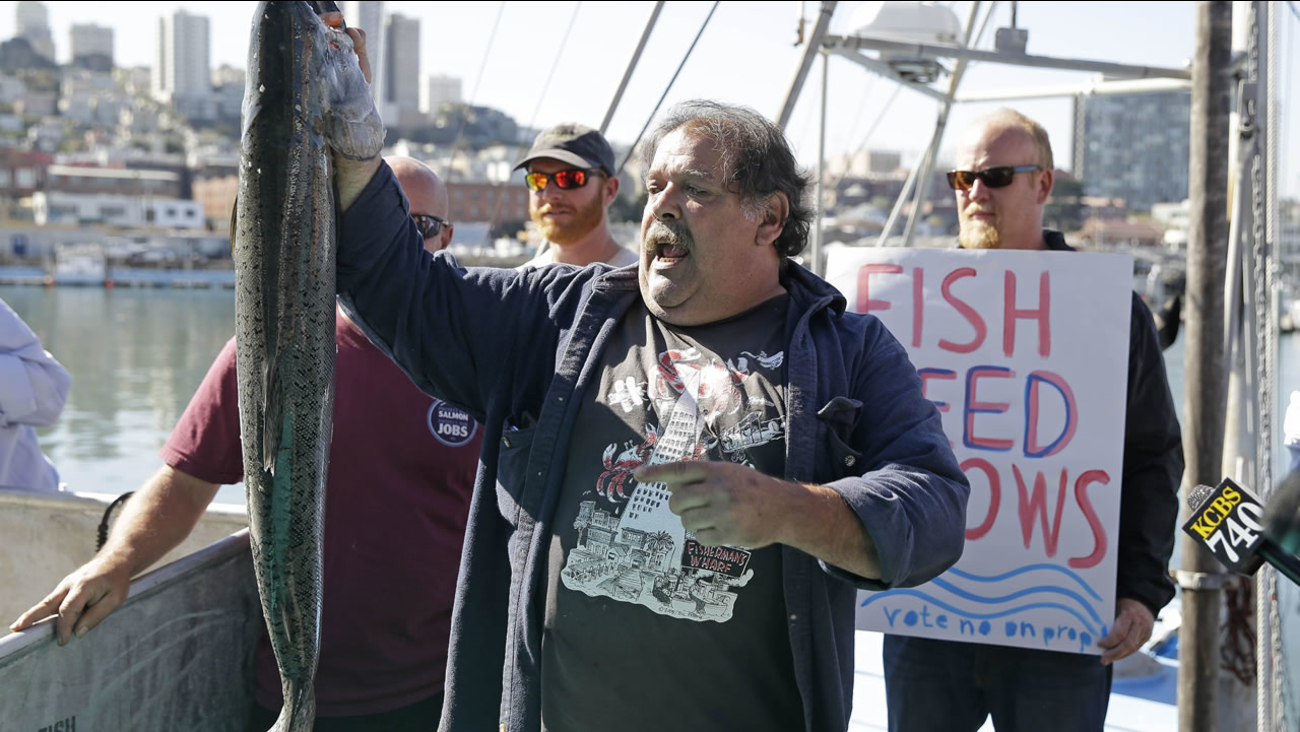 Larry Collins of the San Francisco Crab Boat Association holds up a salmon during a protest against Proposition 1 the state water bond at Fisherman's Wharf Friday.

SAN FRANCISCO -- State and federal wildlife officials are resorting to installing giant water chillers in some of California's fish hatcheries, as drought, over-allocation of water and climate change all combine this year to make temperatures too warm for some baby salmon and other fish to survive.

U.S. Fish and Wildlife Service workers installed the coolers at the Livingston Stone National Fish Hatchery at the foot of northern California's Shasta Dam this summer when water temperatures hit the mid-60s - too tepid for the half-million winter-run baby salmon growing there, said Scott Hamelberg, a federal hatchery manager.

The winter-run salmon are endangered, and the coolers lower the water temperature to a more livable 60 degrees, he said.

The big water coolers are a first for the federal hatchery, necessitated by warmer-than-normal water in California's third year of drought.

At the American River hatchery east of Sacramento, the U.S. Bureau of Reclamation and the California Department of Fish and Wildlife also are installing giant coolers to bring down water temperatures for the hatchery's young salmon and trout, hatchery manager Gary Novak said.

Smaller coolers in tanks are cooling various other fish rescued by wildlife officials after California's drought dried up their home stretch of rivers and streams entirely.

The fish refrigerators are the latest unusual measure taken by fish and wildlife managers to protect fish and California's $1.4 billion commercial and recreational fishing industry while most of the state remains in the most severe category of drought. In June, state wildlife officials used tanker trucks to evacuate 2 million fish from hatcheries deemed dangerously warm.

"They need cold water to make it," said Larry Collins, a San Francisco-fisherman who says he's watched California's salmon-fishing fleet fall from 5,000 boats to 500 over his career. Eighty percent of California's water is used by agriculture, and the legal battles among fishing groups, conservationists and farmers are virtually unending in the state.

State and federal officials also are considering California's first-time try at even more intervention in the spawning season - removing fish eggs en masse to hold them in the cool water of hatcheries, then releasing the eggs to hatch in rivers later this year when the water cools.

John McManus, head of the Golden Gate Salmon Association, is one of many fishermen pushing government officials to do what it takes to get California's fish through the drought.

"We're looking at losing an entire generation" of salmon because of the hot temperatures, McManus said.

Bay Area's record week ahead for dry weather pattern
Dry start to 2020 has some in Bay Area worried about drought
WATCH IN 60: BART ridership, no Moms 4 Housing charges, moderate drought in CA