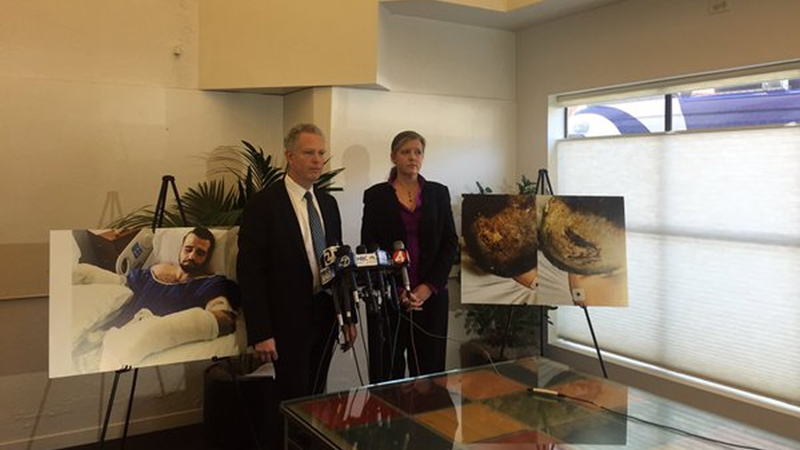 "This is a case of police officers acting beyond the authority of the law," said Gascon.

The sheriff's deputies were caught on video beating and seriously injuring a him in an alley.

According to the Sheriff's Office, Petrov rammed two deputies' vehicles and led a law enforcement officials on a chase across the Bay Bridge before deputies on foot eventually caught up to him in the Mission district.

Deputies Luis Santamaria and Paul Wieber can be seen in the video swinging their batons over and over again while Petrov moans on the ground.

Petrov's attorneys said he was struck more than 40 times, causing multiple head lacerations and fractures in both his hands.

According to statements they made after the incident, Petrov was resisting and reaching for his waistband, leading the deputies to fear for their safety.

Petrov's attorney questioned the authenticity of the deputies' statements, which were authored four days after the video was released.


"Policing that violates our constitutional rights damages the reputation of every person that wears the uniform, and it damages the public's perception of those that are sworn to serve." said District Attorney George Gascón. "When officers take the law into their own hands, they undermine the moral authority of the entire criminal justice system."

Two separate videos capture Deputies Santamaria and Wieber beating Mr. Petrov with their batons over the course of 40 seconds, striking him at least 30 times. During the beating, Mr. Petrov is heard crying out and saying, "I'm sorry," "Help me," and "Oh my God." The deputies stopped striking Mr. Petrov when other peace officers from multiple law enforcement agencies arrived and Mr. Petrov was arrested.

Court documents outline numerous injuries that Mr. Petrov sustained as a result of this assault: a concussion, multiple broken bones in both hands, a mild traumatic brain injury, and deep lacerations to his head. According to court documents, Mr. Petrov subsequently underwent surgery to repair extensive injuries to his hands, including the placement of plates, screws, and pins.

Each deputy is charged in this case with three felonies: assault with a deadly weapon, battery with serious bodily injury and assault under Color of Authority. The complaint also alleges that the defendants personally inflicted great bodily injury on Petrov and personally used a dangerous or deadly weapon in the commission of the assault and battery.

The D.A.'s office and Alameda County Sheriff's Office are investigating whether a third deputy, Deputy Osborne, gave Petrov's gold chain to a couple who witnessed the beating to silence them.

In an emailed statement, Petrov's civil attorney says, "We still should see one or more deputies indicted for theft and obstruction of justice. And the civil rights case is likely to reveal more wrongdoing by deputies who stood by and watched, or who helped cover up crimes."

There have been changes at the Alameda County Sheriff's Office, resulting from this case, including a mandatory body camera policy. "Every use of force now gets reviewed up to every rank including assistant sheriff," said Sheriff Greg Ahern with Alameda County.

The defendants have bail set in the amount of $140,000 each and will surrender by end of day Wednesday, May 11. An arraignment date has not been set.

Petrov is currently in federal custody on gun and drug charges stemming from a separate investigation.

.@JeffAdachi is here. It was the public defender's former student who shared surveillance video of #Petrov beating pic.twitter.com/uGpTkUBkBW