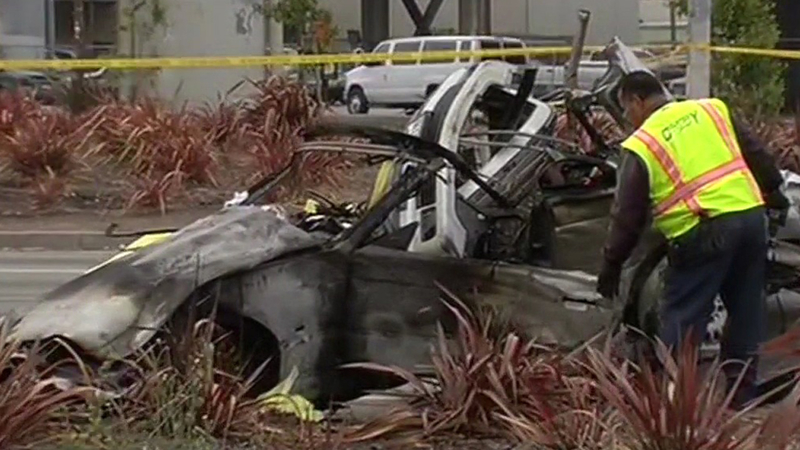 SAN FRANCISCO (KGO) -- Two people died in a fiery crash in San Francisco after leading the CHP on a chase from one side of the Bay to the other in a stolen car. The crash affected traffic coming off the Bay Bridge into San Francisco all morning. The Fifth Street off-ramp has since reopened.

Investigators say the two people inside the car died instantly after hitting a wall, rolling several times and then catching on fire. CHP officers had been chasing the car over the Bay Bridge, but slowed down when the car took the Fifth Street exit into San Francisco.

"In this case the officer backed off and survived the turn, they took it at 100 mph and didn't," said CHP Spokesperson Officer Mike Ferguson.

The chase began in Oakland around 3 a.m. A witness said at first the car was probably going around 80 mph, but after the Bay Bridge toll plaza, it started picking up speed.

"When they reached Treasure Island tunnel is when we estimate that they were going over 100 mph. At that point, the patrol officers that are involved are constantly evaluating whether it's a pro and con to pull out of pursuit or discontinue. In this case, as always it's officers' sound judgment," said CHP Spokesperson Officer Mike Ferguson.

Officers had tried to pull the driver over in Oakland because the car had been reported stolen in San Francisco on Monday.

After the crash, officials closed the Fifth street off-ramp, which caused traffic to backup during the morning commute. They shut it down until 9 a.m. while investigators gathered evidence.

"What we're trying to do is the best we can for the surviving family and determine what happened here to put an end or closure to this incident," said Ferguson.

Investigators said the driver who was killed was a man. Both of the deceased have not been identified.
Related topics:
san franciscooaklandcrimepolice chasechpbay bridgesfpdcar fire
Copyright © 2021 KGO-TV. All Rights Reserved.
TOP STORIES
Frustration among riders as Uber, Lyft prices soar across US
Naftali Bennett becomes Israel PM, ending Netanyahu's rule
What to expect from CA's June 15 reopening
CA reopening: Where you'll still have to wear a mask on June 15
North Bay residents take part in wildfire evacuation drill
Cal/OSHA proposes new workplace guidelines ahead of next week's vote
Dog stolen in car break-in during couple's anniversary trip in SF
Show More
Poll: What do you think about California's reopening?
National Puerto Rican Day Parade special aired Sunday
What to know about the delta variant first detected in India
Rash of mass shootings stirs US fears heading into summer
French President Macron says US is 'definitely' back
More TOP STORIES News