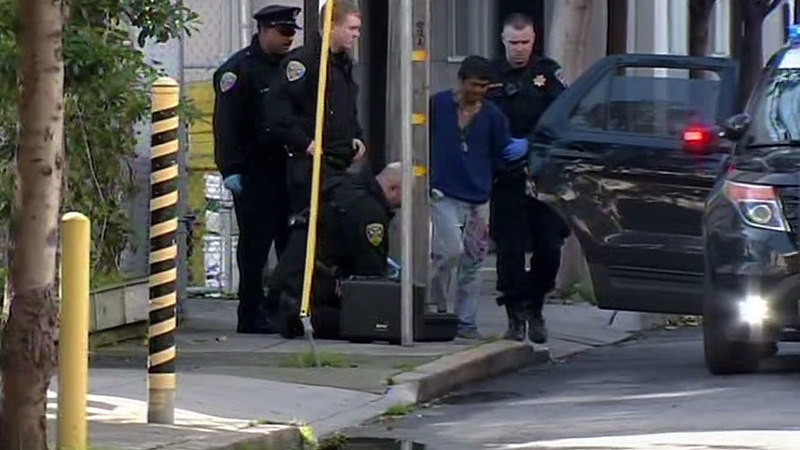 SAN FRANCISCO (KGO) -- A CHP officer was stabbed in the neck and in the arm Tuesday morning in San Francisco. The suspect is under arrest.

Around 5 p.m. we learned that the officer is out of surgery at San Francisco General Hospital and in stable condition. We do not know his name.

The incident began when two CHP officers in their patrol car were cruising by the Essex Street onramp to eastbound I-80 and saw a man walking on the roadway towards the Bay Bridge.

The two CHP officers stopped the man, who appeared to be homeless. After a few minutes, the officers say the man pulled a knife attacked one of the officers, there was a struggle and the man ran away. A chase ensued and San Francisco police say at the end of the chase the man tried to grab a police officer's gun.

The CHP officer's partner rendered first aid until an ambulance was able to transfer him to San Francisco General Hospital.

CHP Capt. Christopher Sherry told reporters, "I can tell you he was stabbed in the upper torso and in the neck. And as you can imagine, it is a very serious, violent attack..."

The attack and investigation closed the east-bound onramp to the Bay Bridge at Harrison and Essex streets for four hours, while police looked for clues and spoke with witnesses in and around a homeless encampment, directly behind the guard rails. No one was there when we visited, Tuesday afternoon.

Other homeless, nearby, told us they knew nothing about what happened. One man told us, "I don't know what to think. When you get to messing with cops, it's all bad."

It certainly wasn't good today. Besides closing the onramp, police had to search for their suspect, who took off through the neighborhood, creating a tense environment. Many people saw cop cars and an ambulance rushing to the scene.

Officers shut down several blocks of 4th Street while they looked for the suspect. He was later found outside a Wells Fargo bank on 4th and Brannan streets. The man was captured as he ran inside the bank.

They found the knife on the pavement in the bank's parking lot.

San Francisco paramedics took away the suspect to get checked out. He was later identified as 44-year-old Noel Corpuz. He was booked at county jail for attempted murder, aggravated assault, and resisting arrest.

Police believe he may have been staying at a homeless encampment located near the shoulder of the Essex Street onramp.

"I just feel like it's crazy. For a person to do that to a CHP, it's just crazy," witness Lupe Esco said.

Meantime, at San Francisco General Hospital, the wait for news of that wounded officer has lasted all day.

The officer is a seven-year veteran of the CHP. His injuries were life-threatening, but currently he is in stable condition following surgery.

Anyone with additional information is urged to contact the SFPD anonymous tip line at (415) 575-4444, text a tip to TIP411 with SFPD at the beginning of the message.