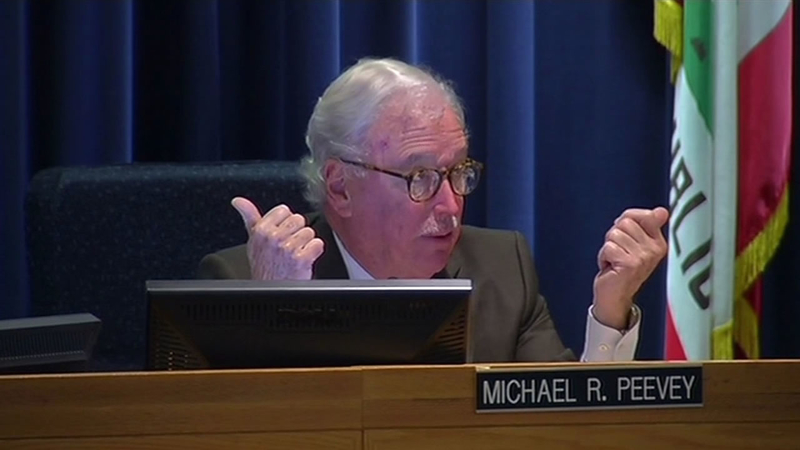 SAN FRANCISCO (KGO) -- It was the end of an era as the Michael Peevey, the chief regulator of utilities in California, presided over his very last meeting on Thursday, after a controversial reign that included the deadly San Bruno explosion.

The praise and adulation went on for hours at the meeting. Former California Governor Arnold Schwarzenegger wrote a letter calling him a hero for his environmental stewardship. The letter was read by Susan Kennedy, a former CPUC Commissioner.

"Under you leadership this commission displayed uncommon valor in the fight against climate change. When the history books are written about California's leading role in facing one of the greatest challenges of our time, Michael Peevey will be remembered as the quiet hero who got it done. I am proud to have served with you. Sincerely, Arnold Schwarzenegger."

California Public Utilities Commission President, Peevey, arguably the most powerful state regulator, came under fire for the agency's lax regulation of PG&E before the deadly San Bruno explosion, and for recent revelations of emails that show cozy ties with PG&E and other utilities. As a result, he has decided not to seek another appointment.

Outside the state building, San Bruno Mayor Jim Ruane and State Senator Jerry Hill criticized Peevey for his ties with PG&E and his role in the scandals tied to the fatal explosion in San Bruno.

They believe Peevey created a culture within the CPUC that allowed questionable relations with utilities that the commission regulates.

"The corruption which led to these actions and the millions of dollars in fines and penalties is not shocking. It is unconscionable," said Ruane.

"I believe there is criminal behavior and hopefully, the U.S. Attorney and Attorney General will see it in that light and file charges," said Hill.

Hill has also been a loud critic of Peevey's many trips abroad. His state filings show Peevey received gifts of $230,000 dollars in international travel since he was appointed president in 2003. In all, Peevey spent 206 days abroad to at least 13 countries.

A year before the San Bruno explosion, ABC7 News interviewed Peevey about a trip to Sweden, accompanied by PG&E executives.

He defended his travels.

"I've gone to Sweden a number of times sponsored by the Swedish government. These are not junkets," explained Peevey.

But Senator Hill says many of the trips were paid for by nonprofit groups widely believed to be funded by industries the CPUC regulates.

"These utilities, their representatives are along for the ride, sitting, networking, drinking, partying and having a great time with them during the opportunity," said Hill.