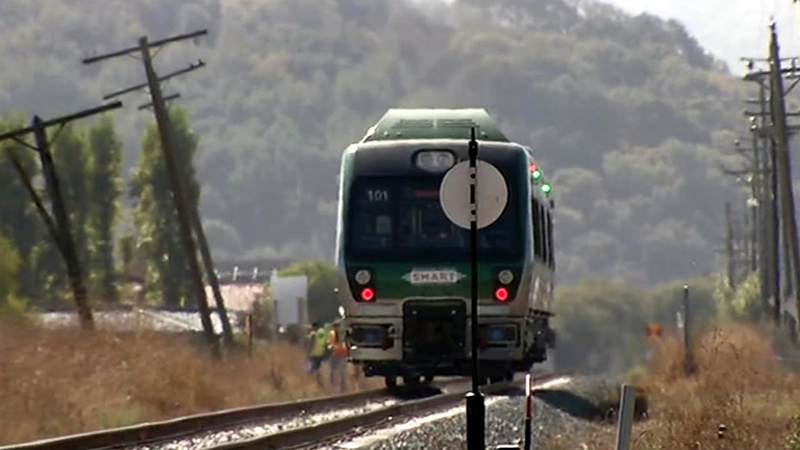 NOVATO, Calif. (KGO) -- Crews tested brakes and speed on a SMART train Thursday that will link Sonoma and Marin counties.

It was hardly a normal commute along Highway 101 north of Novato as crews tested the train.

The Sonoma Marin Rail Transit remains a little over a year away from beginning actual service.

On Thursday, the railroad allowed ABC7 News along during an early sequence of high speed test runs.

The top speed of the train along the track will eventually be 79 miles an hour. The train hit 50 miles per hour for the first time and hit the brakes at that speed for the first time. "It went about 350 feet to stop," one employee said.

This is the first of seven trains. Each needs to be tested and federally certified before the Smart System runs them simultaneously north and south on the same stretch of single track. "We're going start testing what we call the positive train control system and that requires us to run trains on this system and operating speed many, many times," Smart Systems Manager Lisa Cobb said.

So those traveling through the North Bay may have to get used to this.

There are no rides available for the public yet, but now you know a little more about what is going on with these trains.

If you swear you saw the @smartrain moving fast through #marin and portions of #novato, today, you were correct. pic.twitter.com/xT708DRnER

#smartrain is ramping up speed runs through a test stretch in #novato. Top speed ..50mph. The tested braking, too. pic.twitter.com/cgbt7DlsCS

#smartrain So yes, this was a first. And we went along for it. Smooth ride, I might add. #marin #novato pic.twitter.com/HxddEY2wsE