KTRK
SAN ANTONIO -- The man accused of driving the tractor-trailer that held more than 30 people in what's been described as a "horrific tragedy" was officially charged Monday.

James Mathew Bradley Jr., 60, had his first court appearance in San Antonio and was charged in the deaths of 10 of his passengers and could face the death penalty if convicted.

The charging documents released Monday showed that Bradley claimed he had no knowledge of what or who was in the truck.

He claimed to be "unaware of the contents of the trailer" and had stopped at Walmart to go to the bathroom.

The documents report that Bradley heard "banging and shaking" in the trailer and that when he opened the doors he was "surprised" when he was knocked to the ground by the people in the trailer trying to escape.

He said he then noticed bodies just lying on the floor "like meat." He claimed to have tried to help the victims before the police arrived.

Bradley appeared in federal court on charges of illegally transporting immigrants for financial gain, resulting in death. He was charged just hours after the 10th person was reported to have died.

Nearly 20 others rescued from the rig were hospitalized in dire condition, many with extreme dehydration and heatstroke, officials said.

One U.S. official said Sunday evening that 17 of those rescued were being treated for injuries that were considered life-threatening. The official spoke to The Associated Press on condition of anonymity because the information has not been publicly released.

Authorities were called to the San Antonio parking lot late Saturday or early Sunday and found eight people dead inside the truck.

"(The victims) were very hot to the touch. So these people were in this trailer without any signs of any type of water," San Antonio Fire Chief Charles Hood said.

Authorities would not say whether the trailer was locked when they arrived, but they said it had no working air conditioning.

It was just the latest smuggling-by-truck operation to end in tragedy. In one of the worst cases on record in the U.S., 19 immigrants locked inside a stifling rig died in Victoria, Texas, in 2003.


Based on initial interviews with survivors of the San Antonio tragedy, more than 100 people may have been packed into the back of the 18-wheeler at one point in its journey, ICE acting Director Thomas Homan said. One passenger said they took turns breathing through a hole and pounded on the walls to get the driver's attention.

Officials said 39 people were inside when rescuers arrived, and the rest were believed to have escaped or hitched rides to their next destination.

Some of the survivors told authorities they were from Mexico and four appeared to be between 10 and 17 years old, Homan said. Investigators gave no details on where the rig began its journey or where it was headed.

The U.S. Homeland Security Department stepped in to take the lead in the investigation from San Antonio police. Department Secretary John Kelly said the incident demonstrates the brutality of smuggling organizations that "have no regard for human life and seek only profits." 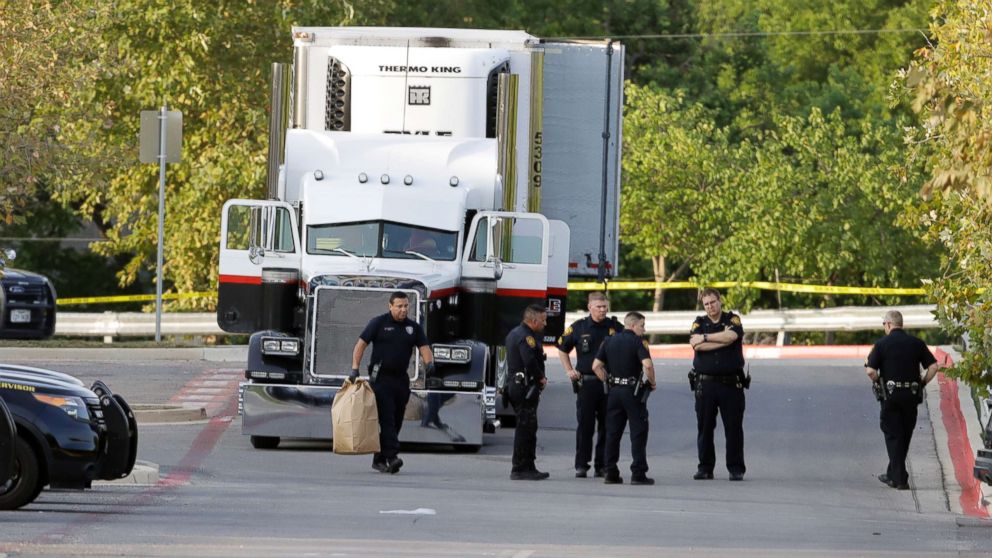