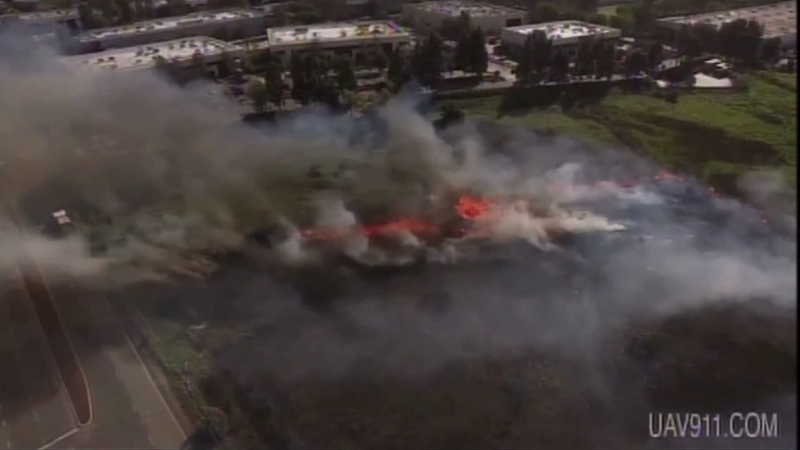 It's believed to be the first time a Bay Area fire department has used drone technology to help with knocking out a fire.

"I was able to know where I needed to go in the air, to figure out how I could help them," said San Francisco resident Brandon Vaccaro.

The fire occurred Monday afternoon and it caught many by surprise. Photographer Brandon Vaccaro first heard about it on the radio. He drove over to Adams Drive near the Menlo Business Park to grab some images for his portfolio, not knowing the role he'd eventually play.

"Kind of capture what's going on and be able to capture the story," Vaccaro said.

With Cal-Fire unable to send a helicopter, the Menlo Park Fire Protection District initially had a tough time fighting the fire, but Vacarro volunteered to put his drone in the air and the command post gave him the green light.

"It gave us that aerial, information, situational awareness, special, how far the fire was from the houses, and all that kind of stuff, you have a much better view when you're up in the air," said Dan Coyle of the Menlo Park Fire Protection District.

Menlo Park is currently pursuing its own drone program through the Federal Aviation Administration, and stresses the technology can be very helpful when properly used by a trained operator. Vacarro says he was glad to help by transmitting the images in real-time.

"Keeping visual line of sight with the aircraft, safety is number one when you fly, and also making sure people on the ground are safe as well. Again ,that all comes down to training, and I train every day," Vaccaro said.

As for who started the fire, police have identified a possible suspect who may be connected to a nearby homeless encampment.