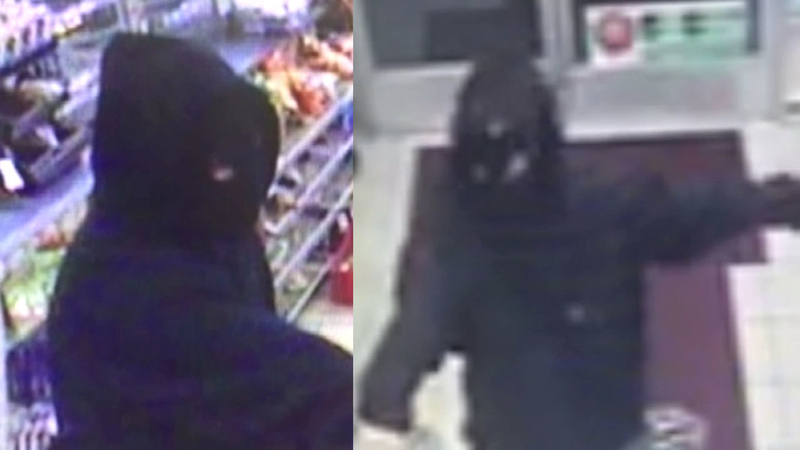 WALNUT CREEK, Calif. (KGO) -- Police agencies across the Bay Area are on the hunt for a serial robber targeting gas stations. A surveillance image was released by police, taken in Walnut Creek, and it shows the masked man authorities are trying to find.

The robber is believed to have hit up gas stations across the Bay Area, including several stores in San Leandro.

The most recent robbery happened in Walnut Creek where he walked into a Valero gas station and robbed the clerk at gunpoint around 5:30 a.m. Wednesday.

So far, this guy has struck five times in the last nine days and police are afraid his violent behavior will escalate with every robbery new he commits.

The armed serial robber was wearing the same black outfit when he struck the Valero gas station on Ygnacio Valley Road in Walnut Creek early Wednesday morning, but this was the first time he ventured outside of the San Leandro area.

San Leandro police say the man robbed four 7-Eleven stores within four days. Last Monday, he hit the store on 136th Avenue and East 14th Street. The following Wednesday he robbed the one Davis Street. An employee pressed a panic button and police arrived just minutes after the robber left. Then, 20 minutes later, he was pointing his semi-automatic handgun at another clerk at a 7-Eleven on Manor Boulevard.

McManus said, "In cases like this they become increasingly dangerous as the frequency increases of the robberies."

The next day, on Christmas Eve, he struck again at the 7-Eleven on 167th Avenue and Foothill Boulevard. Store clerk Dan Leister says the robber cleaned out the register, the same way he has in every other robbery.

Leister said, "I think it's pretty crazy. I think people need to realize there ain't enough money here to rob anybody."

The suspect is about 5'9" and the employees say he seems familiar with each store and he always strikes in the early morning hours between 3:30 and 5:30 a.m.