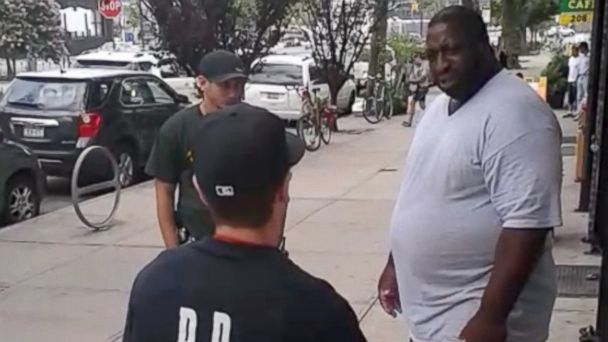 The family of Eric Garner -- the New York man who died after he was placed in a chokehold by an NYPD officer -- said they were "frustrated" by the lack of resolution in the federal investigation into Garner's death, which remains ongoing nearly three years later.

"Once again, we're gonna be playing the waiting game," Garner's mother, Gwen Carr, said in a press conference Wednesday afternoon after the family met with officials from the Department of Justice in Brooklyn.

"We came here today for answers, but evidently, we are still without knowing whether we are going to get justice or not," Carr said.

Garner died in July 2014 after he was placed in a chokehold by NYPD Officer David Pantaleo during an arrest for allegedly selling untaxed cigarettes.

In the witness video of the incident, the 43-year-old can be heard saying, "I can't breathe." The phrase later became the slogan for protests demanding justice for Garner's death.

One of the attorneys representing the Garner family, Jonathan Moore, said the family met with two veteran prosecutors in the Justice Department's civil rights division, "both of whom have a long history of prosecuting police officers in various venues throughout the country."

During the meeting, the family had a "frank discussion" with the officials, in which they expressed "deep frustration" at the slow pace of the investigation, Moore said.

The Rev. Al Sharpton said the DOJ officials stressed to them that "the case is still active and being seriously investigated." The family is "absolutely" still seeking a criminal conviction in Garner's death, he said, but they were not given an indication on when a resolution would be made.

Department of Justice spokesman Devin O'Malley issued a short statement regarding the meeting.

"As is common with an ongoing investigation, agents and prosecutors from the Department of Justice are meeting with the family of Eric Garner today," he said. "There are no new major announcements regarding the matter."

In 2014, a grand jury on Staten Island decided not to indict Pantaleo in connection with Garner's death, meaning the only potential criminal charges against Pantaleo would come from the pending federal investigation.

In order to convict in the federal civil rights case, prosecutors will need to prove that the officers willfully violated Garner's constitutional rights.

Sources close to the investigation have told ABC News that federal prosecutors believe it is tough to prove an obvious violation of Garner's civil rights, even though he died in custody. Instead, they believe that Pantaleo could have been indicted on a manslaughter or reckless endangerment charge if he had been tried on state charges.

Pantaleo was suspended from the police force following the incident. The NYPD will not decide whether Pantaleo should remain on the force until the federal criminal inquiry is complete.

The NYPD did not immediately respond to ABC News' request for comment.