'Everyone was just screaming': Chaos at Ariana Grande concert 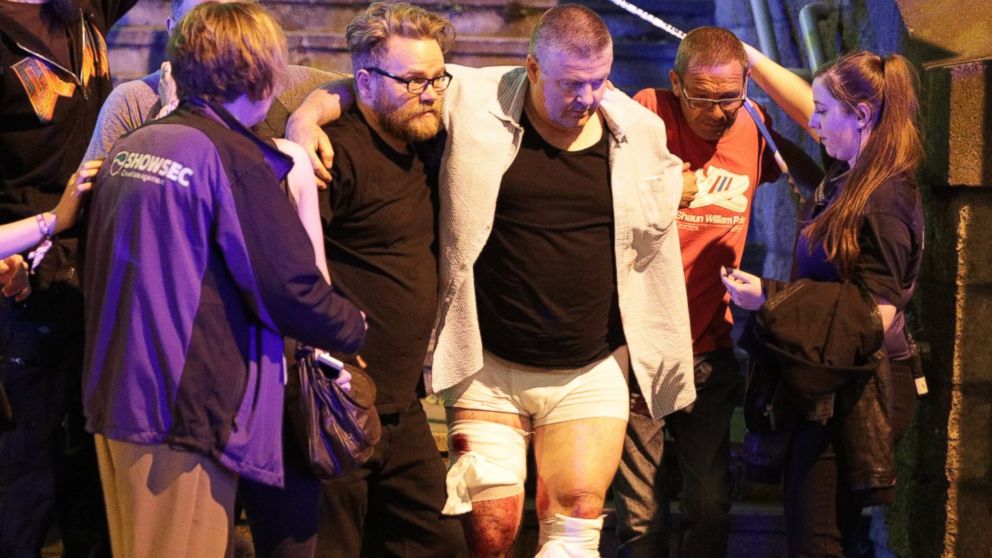 Ivo Delgado Rivero was trying to flee the Ariana Grande concert in Manchester, England, after hearing a loud bang, when he ran into a smoky main corridor and saw people covered in blood.

"I opened the door on the main corridor, it was full of smoke," Rivero told ABC News. "It was one guy that was in the middle of the corridor laying down, head down and a guy asked me for help and I realized that he got he had an injury in the head ... the face covered in blood."

Rivero said he had been watching the concert near the front of the stage in the back left of the Manchester Arena when he heard what sounded like an explosion come from outside. At first, he said he thought it might have been a technical issue with the concert.

"It was a lot of screaming and a lot of people calling out names and it's when we realized that maybe it was something bigger than what we thought at the beginning," he said.

Another concertgoer, Abby Barker, told ABC News she was just getting ready to leave the concert when she heard the bang and the arena dissolved into panic.

Barker told ABC News that the "Dangerous Woman" singer had just left the stage, the music had cut off and the lights were on, when the reported bang happened.

"Everyone over there started running in different directions, screaming," Barker said. "We all started panicking too and ran out the doors and ran down the stairs out of the arena. We got outside and children were crying their eyes out, people talking about it being a bomb, gunshots, there were many parents running towards the arena but no one knew exactly what it was."

Greater Manchester Police said that 19 people are dead and around 50 others are injured. In a statement, police said they were called to the arena at just before 10:35 p.m. local time on Monday. At the moment, the incident is being treated as a "terrorist incident until police know otherwise."

Eyewitness Karen Ford told the BBC that the "huge sound ... sounded like an explosion went off."

"Everyone just stopped and turned around, and then somebody shouted 'it's a bomb' and everyone just started running," she continued. "Everybody was trying to push people up the stairs. There was a lot of children there without parents. There was no one to calm them down so everyone was just screaming, crying and pushing."

Concertgoers said people tried to help each other as they were running from the building.

"Everyone was trying really to protect the kids," Rivero said. "While we were going out just outside there was a massive staircase, it was a woman in a wheelchair stuck there ... and it was a lot of stairs so we tried to help her."

Emergency personnel treated some of the injured at Manchester Victoria railway station near the arena.

Andy Holey, another eyewitness, told the BBC that he was waiting outside the concert and was blown over by the force of what he described as an "explosion." When he awoke, he said he saw many casualties around him. He added that it was unclear if they were injured or dead.

Manchester Arena sent out a tweet after the incident, saying the reported explosion happened outside the concert venue.

Reps for Grande confirmed that she was not harmed. The singer tweeted a few hours later.

U.K. Prime Minister Theresa May said in a statement that they "are working to establish the full details of what is being treated by the police as an appalling terrorist attack."

"All our thoughts are with the victims and the families of those who have been affected," she added.
Related topics:
abc newsnational
Copyright © 2020 ABC News Internet Ventures.
More Videos
From CNN Newsource affiliates
TOP STORIES
Health experts: Don't let your guard down this July 4th weekend