ONLY ON ABC7NEWS.COM: Rental truck stolen from family that just moved to San Francisco found

KGO
FOSTER CITY, Calif. (KGO) -- On Monday, we told you about a couple who came to San Francisco in a Budget rental truck that was stolen with all their belongings in it. The truck's been found. And on Wednesday, ABC7 News was with them as they looked inside to see if the thieves left anything.

That truck is still at the Budget yard in Foster City. Police told the couple that there appeared to be some things still left in the truck that the thieves either missed or left behind. So they went to the yard at 8 a.m. when the gates opened, hoping they would find some of those irreplaceable items still in the truck.

"It was packed til here, we packed it to the gills," said Erin Coe.

The thieves took almost everything in the truck.

"I guess they can sell the crib but not the mattress," said Jeremy Biane.

Family moved to SF with all their belongings in Budget rental Truck which gets stolen parked in Sunset district. pic.twitter.com/7ZlO2VPxWJ

The Budget rental truck with all their belongings was stolen March 4 from the driveway of Erin's parent's home in the Sunset District.

This happened after she, along with her husband and their 17-month-old son Austin, had just arrived from San Diego. They planned to move into an apartment at UCSF where Jeremy, a neuroscientist, had just been hired.

Police told them on Tuesday that the van was abandoned near Sharp Park Golf Course in Pacifica.

On Wednesday, the couple went to the Budget yard where the truck had been towed. They hoped sentimental items would still be inside.

A few things were left. Even some of Austin's toys.

But Erin feared the worst. Her gut feeling was right.

"I already knew it's not here," she said.

Jeremy added, "It's disappointing not to have the sentimental stuff."

"The baby book," said Erin. "His mementos from his mom who passed away."

"It's just been overwhelming," said Erin. "And we just want to say thank you for all of that support.
Related topics:
san franciscofoster citycrimetheftbreak inmovingstolen car
Copyright © 2021 KGO-TV. All Rights Reserved.
RELATED 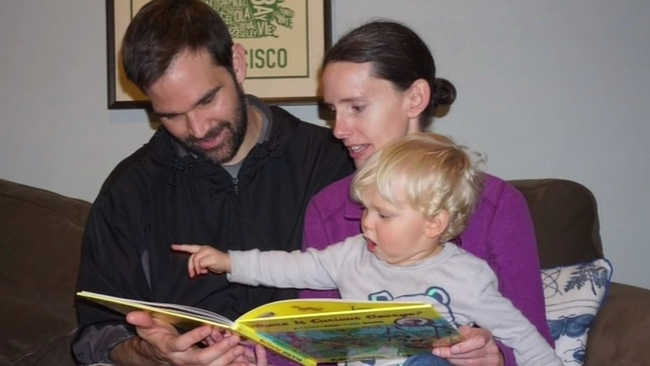