ONLY ON ABC7NEWS.COM: Squatters may be to blame for East Oakland RV fire 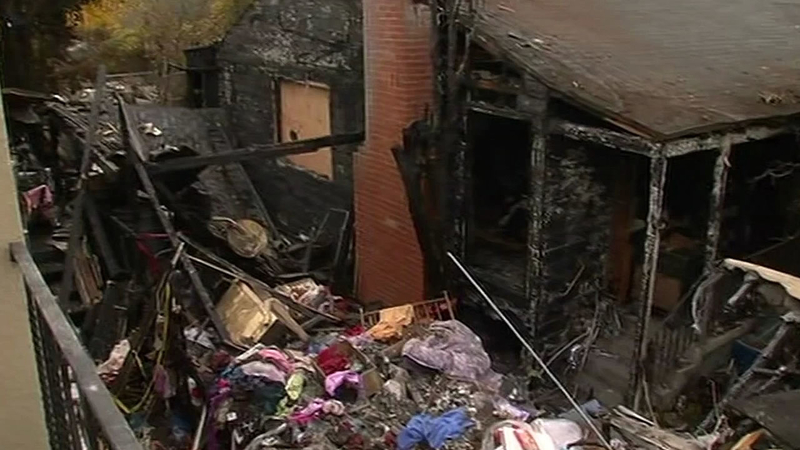 EXCLUSIVE: Squatters may be to blame for East Oakland RV fire

EAST OAKLAND, Calif. (KGO) -- A fire that broke out at an RV trailer gutted a nearby fourplex, leaving a family displaced in East Oakland on Wednesday. Some residents say squatters living inside the RV may be to blame. It's a story you'll see only on ABC7 News.

Residents told ABC7 News they complained over and over to Oakland police and on several occasions they showed up, but the people and problems always came back.

East Oakland residents say this is the next door neighbor from hell, squatters and drug dealing...then a big fire. pic.twitter.com/MmLo4LjBly

The fire started in an RV trailer parked on a property that neighbors have been complaining about for months. "The fire was started from a camper next door. The people inhabiting this place are believed to be squatters," Natalie McNab said.

The fire left Maurice Gillette's fourplex gutted and his extended family, homeless. "The whole neighborhood has been calling the cops and the city about these people and then the cops came around, but they didn't do anything and they looked at us. What can we do? They have more rights than us," he said.

This is the nightmare next door for some East Oakland residents. They say squatters stayed despite their complaints. pic.twitter.com/8sguoQwchi

The house on Clara Street had been vacant since the owner died last year and that's when the trouble started. "A lot of illegal activities, the police are constantly through here and over here and nothing is being done," Niki Perine said.

The RV was just the latest vehicle to show up at the house last week. A few days later, it burst into flames. "All my accolades, my degrees, everything was burned," McNab said.

McNab's childhood memories went up with it. "I am very upset that it had to come to this, I grew up here. I've been living here since I was 3 years old," she said.

Oakland police have responded to the property several times after getting calls related to narcotics and trespassing and there have been several arrests. "We are aware of this situation as well as incidents in the past. We have taken action and put efforts into this in the past and even currently," Oakland Police Department Ofc. Marco Marquez said.

At this point police do not know who owns the property.

When the Gillette family returned to assess the damage, there was a woman amid the ruble next door, a person the Gillette's identified as one of the squatters. "I can't be looking at people who burned my house down," Gillette said.

The woman told ABC7 News she was renting a room at the house.