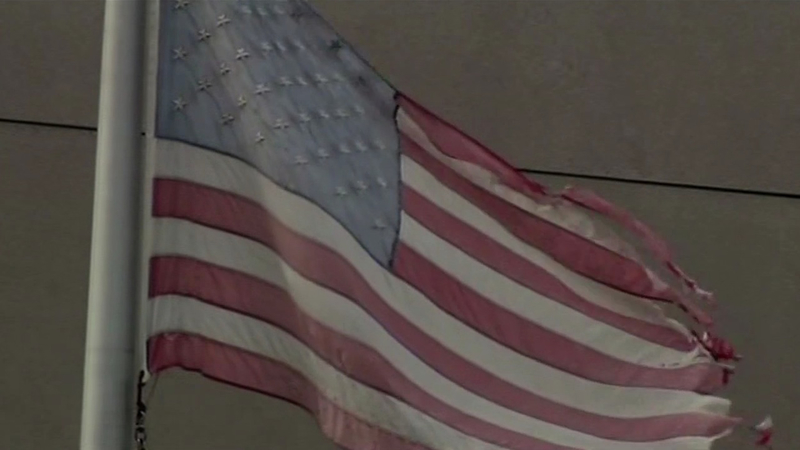 SAN FRANCISCO (KGO) -- When it comes to the American flag, you know there are rules for displaying it. The flag outside the post office on Hyde Street in San Francisco has garnered many complaints about its tattered condition.

The most visible symbol of our country flying above the U.S. Post Office in the Tenderloin District of San Francisco is tattered and its colors are faded.

"Clearly, it's been up there for years to have gotten so much sun it's become ragged, it's terrible," onlooker Jason Armstrong said.

Muni employee Cliff Smethurst first noticed it back in August and alerted the postmaster, twice.

"He said the flags are on order," said Smethurst. "And I reminded him that the flags need to be taken down, they can't be flown like that."

He's right. According to the U.S. Flag Code, a tattered flag should be destroyed in a "dignified way, preferably by burning."

"When I was in elementary school they taught us to respect the flag," said onlooker Randall Coard. "We brought the flag down every single day. We had a ceremony, we folded it up."

We went inside the post office to talk to the supervisor who then told us to call the postmaster's office. We did.

The postmaster's office assured us the flag would be taken down and replaced either today or tomorrow.

When we took a wider picture of the building, we discovered they had a second flag also in bad shape.

"I fly my flag with pride," said Smethurst. "Obviously they do not fly the flag with pride and they never look at their flag, so it tells me they really don't care."

But as we discovered, apparently the people of the Tenderloin do.

"It should be fixed now, you know?" said one bystander. "Not later, not tomorrow, right now. It's an official government building with our nation's flag.

Residents say as the flag is now, it's no longer a symbol of pride.

UPDATE: ABC7 News returned to the post office the day after this report aired, and discovered that the torn and tattered flags were replaced by new ones.
Related topics:
san franciscotenderloinamerican flagflagsusps
Copyright © 2021 KGO-TV. All Rights Reserved.
RELATED 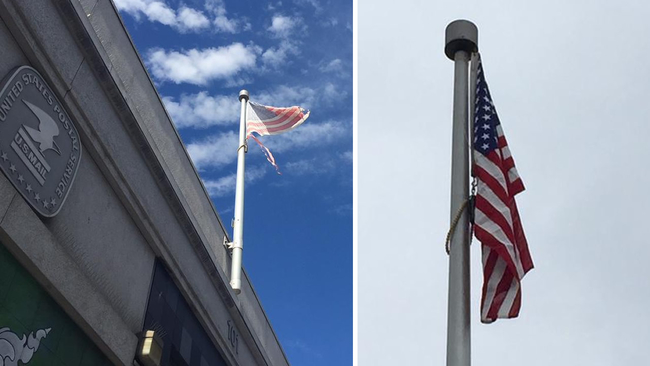