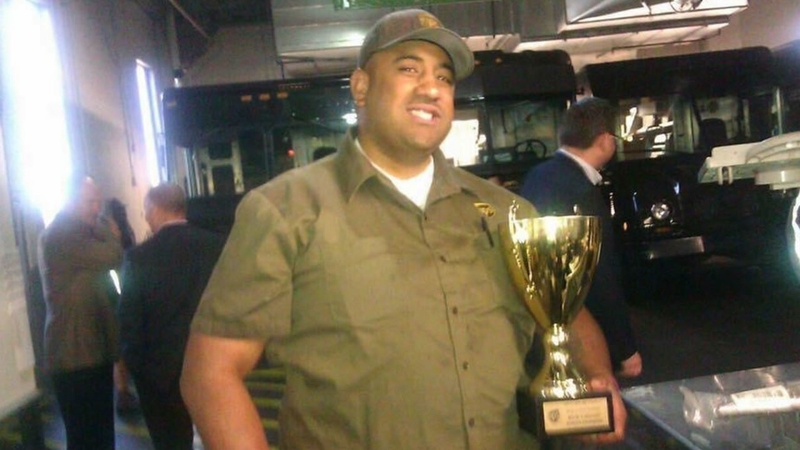 One of UPS shooting victims identified by family as Hercules man

SAN FRANCISCO (KGO) -- Family members have identified one of the victims killed Wednesday morning during a shooting at a UPS facility in San Francisco as 46-year-old Mike Lefiti, a father of five.

Dozens of family members were at the scene for Lefiti, including his cousin who saw him right after he was shot at work.

Mack Toia says he heard those shots around 9 a.m. at the UPS facility in Potrero Hill. He was there to pick up his cousin, Lefiti, from work.

Mack Toia speaks to me about his cousin, Mike Lefiti, a 46 yr old father of 5, shot and killed today at the San Francisco UPS facility... pic.twitter.com/ZDeU6STmjP

"I came out the van, I walked up towards the gate and I looked over and I saw my cousin sprawled out on the concrete," Toia said.

Toia says he ran to his cousin, who he believes was shot in the stomach, and told him "I love you."

"The police officers were right on the scene just like that. I got to touch him, but I couldn't hug him. They just pushed me away because they were trying to resuscitate him," Toia said.

Toia says Lefiti worked for UPS for 17 years and had a short work day on Wednesday because he was on light duty.

He was a father of five and just celebrated his seven year wedding anniversary on Tuesday.

Toia says he actually recently moved in with his cousin and that they come from a very tight-knit San Francisco family, most of whom are here at San Francisco General grieving.

Some of Lefiti's coworkers said wonderful things about him, calling him a "gentle giant" and "Big Mike."

On his Facebook page, Lefiti posted frequently about his time working at UPS, including a photo of a certificate of service for 15 years with the company back in 2015.

Four people, police confirm, were killed in Wednesday's shooting, which happened shortly before 9 a.m. as drivers gathered for their morning meeting. Two other employees were shot in the shooting and five were hurt, police say.

The gunman, identified by multiple sources to I-Team reporter Dan Noyes, was UPS employee Jimmy Lam. San Francisco police have not released the identity of the shooter. A UPS employee tells Noyes that Lam "had it out for a manager."