The family spoke during a news conference, criticizing the Vallejo Unified School District.

Police identified the suspect as Zachary kroll, 19, a Vallejo resident who was arrested early Friday morning.

#Vallejo Shooting Also says that if 19 year old suspect is guilty, “I hope he burns in hell.” pic.twitter.com/0lIHrFWW4H

His history with Max remains a mystery. "All we can say is they were known to each other, but we cannot go into further details what that relationship is," Vallejo Police Department Lt. Kenny Park said.

The killing took place just off the campus of Jesse M. Bethel High School along a canal near Ascot Parkway.

Bishop defended charges that Jesse M. Bethel High School is unsafe and said she and the rest of the staff view it as a very safe campus.

After police left, the family held a press conference of its own about Max and school safety. "He didn't feel safe there and he told me several times, but he just didn't feel safe," Jamie said.

As to what their son was doing off campus during school hours is unknown, that's on the district, his father implied. "How the hell could they not know where somebody was that close to the school. Why were they not down there asking what he was doing?" James Busch, Sr. said.

There are a lot questions, but not many answers at this time.

On Thursday night, the family called for 14 days of vigils for peace. Their sentiments include the family of suspect Kroll. "I prayed for the family of Zach and I want God to come down with my family and Zach's family and all of our families, the whole city and just bless us and make sure that no more harm comes to any more kids. I'm tired of this," Jamie said.

Anyone with information on the shooting should call police at 707-648-4524.
Related topics:
vallejosearchcrimearresthigh schoolgun violenceshootingteenagerstudent safetyteenpoliceinvestigationstudents
Copyright © 2020 KGO-TV. All Rights Reserved.
RELATED 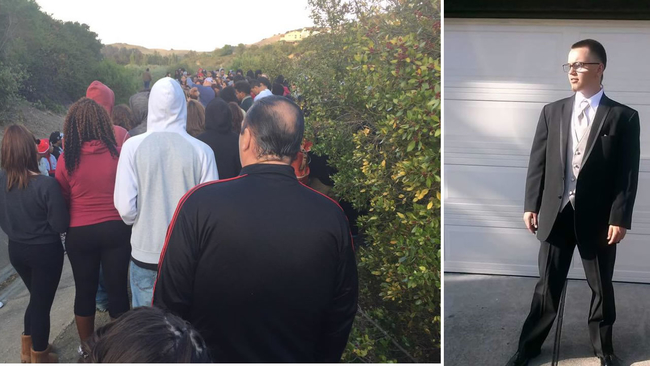