KGO
MONTARA, Calif. (KGO) -- There's still no sign of man who vanished without a trace more than six weeks ago.

It's hard to go even a few feet without seeing a poster for the young man who's a skateboarder, a Raiders fan, an electrician's apprentice, and now a missing person.

The search has become a well-organized effort, led by Richard's father, who has flown out to California from Hawaii in hopes of finding his son.

Dan is making his third trip to the mainland after his son disappeared. Moss, 22, was on his way to work and made a stop at McDonald's, drove through the Devil's Slide tunnel and then simply vanished.

"The car and the person are missing," Dan continued. "There are three miles from here to work. That's it. Nothing -- and it's in a tiny little town."

Surveillance cameras along the route showed him present one mile and gone the next. There was no debris from a car crash. The only evidence was his AAA card found in the sand.

On his first trip out, Dan chartered a helicopter. This time, they searched through bushes with long poles in an effort that's grown to over 200 volunteers.

"I did not know that there was this many good people in the world," Dan said.

Local merchants have donated printing, lodging, and mail services. They've gotten checks from strangers, even free flights from a flight attendant. But the one thing in short supply is answers.

"Even though we've got all of these different laws, we are talking about a human being. For example, why can't we look at the bank records," Dan asked.

Now, they're visiting elected officials starting with Congresswoman Jackie Speier, hoping to cut through the red tape and find Moss on the other side.

"If you knew him, he would be one of your buddies. He's just that kind of kid," Dan told ABC7 News. "He's an adult now, I guess, but he is our baby."
Report a correction or typo
Related topics:
san mateomontaracrimesearchbeachesmissing mancarsearch and rescuewater searchmissing personsan mateo county
Copyright © 2021 KGO-TV. All Rights Reserved.
RELATED 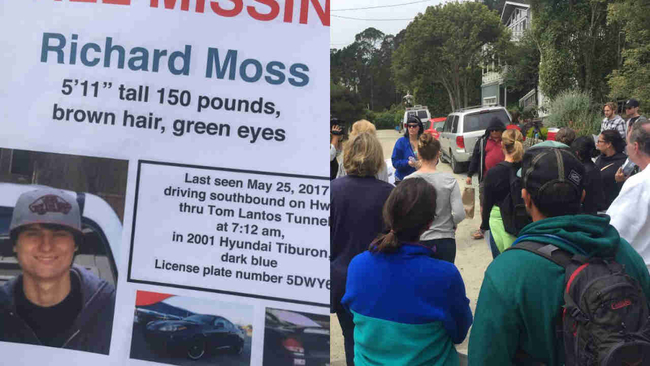