KGO
SAN FRANCISCO (KGO) -- Broken glass is all that's left after a thief broke into an FBI agent's car and stole both his gun and badge on Sunday.

The car was parked near Alamo Square and Ida Wells High School in San Francisco.

The street where it happened is small but it attracts a lot of tourists and car burglars, unbeknownst to an FBI agent who parked his car there.

Just a week and a half ago, a cellphone video caught a woman breaking into a car where the FBI agent's vehicle was parked on Sunday.

She pretended to tie her shoe and then broke into not one but two windows, stealing backpacks.

Using a spark plug, it only takes a split second to smash the glass.

Neighbors say there's an epidemic of car break-ins on Pierce Street between Hayes and Fell streets.

"Usually there aren't cop cars so that sort of got our attention," another San Francisco resident said.

San Francisco police responded quickly because the car belonged to an FBI agent. "He returned back to the vehicle and within 15 minutes, he found his rear window broken out and his FBI department-issued, fully loaded glock 27 and ankle holster gone," police dispatch said.

Not only was the agent's gun stolen but the thief also took his badge and credentials.

It's become a familiar and dangerous refrain.

Last year, Kate Steinle was shot to death on Pier 14. Police say the transient charged with her murder used a gun stolen from a federal agent's car.

Last August, the UC Berkeley police chief had her gun stolen from her vehicle.

Also last year, firearms were stolen from an off-duty CHP officer's car and a vehicle belonging to a Hayward cop.

"It's kinda scary, that somebody would leave a gun just laying around and it's dangerous," San Francisco resident Ron Taurany said.

Former Police Chief Greg Suhr even wrote a letter to other agencies, asking that their officers and agents lock their guns when parking in the city.

In this case, the FBI declined to comment, saying only that they're looking into it. 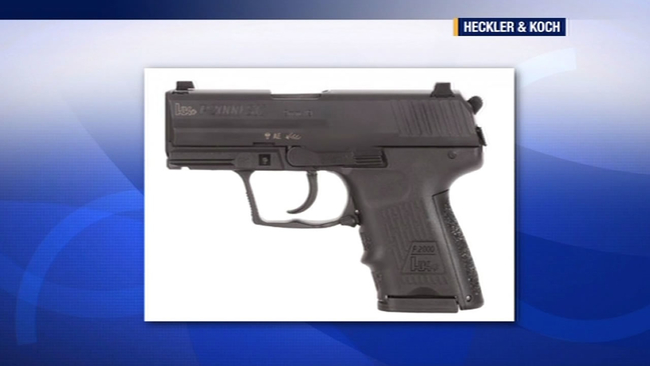