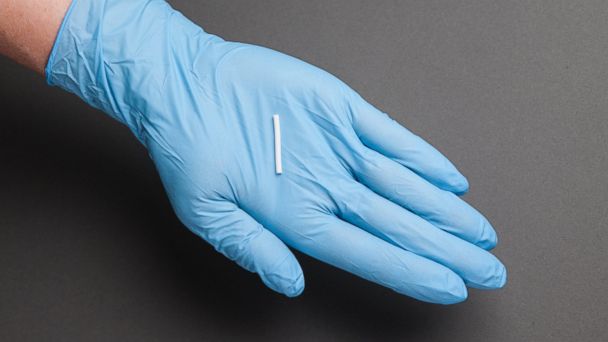 An implantable treatment for opioid addiction was approved today by the U.S. Food and Drug Administration.

The implant, a match-sized rod that is inserted under the skin, releases a milder opioid drug called buprenorphine that is usually taken orally to treat addiction. Under the name Probuphine, the implant comprises four rods that release the drug at a low dose for six months.

"Anyone who's gone through addiction knows that motivation fluctuates day to day. This allows a person to decide for their future self," Dr. Keith Humphreys, a Stanford psychiatrist who also served as a senior policy advisor at the White House Office of National Drug Control Policy, told ABC News.

The implant is designed for opioid addicts who are "already stable on low-to-moderate doses" of oral buprenorphine, the FDA said in a statement. Experts like Humphreys believe this could be a game-changer for the 2.5 million Americans with an opioid addiction.

Experts also say that an implantable rod could prevent addicts from abusing the oral drug.

In January, an FDA advisory committee voted 12-to-5 to recommend the implant for FDA approval, but it was unclear how the FDA would act on that recommendation until today.

While Probuphine was found to be about as effective as the oral medication, the FDA advisory report raised the question of who would be implanting and removing the rods. Relatively few buprenorphine prescriptions are written by doctors with surgical training, the report said.

"A typical psychiatrist hasn't laid their hand on a patient in 20 years," Humphreys said.

Early tests showed that even clinicians who regularly performed procedures were unable to remove the implant in some cases, according to the report.

"There have been improvements in the tools and techniques," said Behshad Sheldon, CEO of Braeburn Pharmaceuticals, which markets Probuphine with San Francisco-based Titan Pharmaceuticals.

Both the implantation and removal kits have undergone recent changes to make it easier for doctors and reduce bruising, Sheldon told ABC News.

While adverse events have been rarely reported in clinical trials, they may include infection at the injection side and potential nerve damage, according to the FDA report.

Braeburn aims to make the product widely available to patients starting June 21, said Sheldon, adding that it will cost "under $1,000 a month" but declining to provide an exact price.

But Sarah Wilson, a mother of four who was involved in the implant trials, said she has already seen some benefit.

Wilson told ABC News that she became addicted to hydrocodone seven years ago after being hit by a drunk driver and developing chronic pain. She began taking oral buprenorphine to get sober and was later transitioned to the Probuphine implant.

She said she stopped worrying that her kids would get into her medication or that her local pharmacy would not have the drug in stock. She also stopped waking up in the early morning when she felt the oral drugs would wear off, she said.

"I went from existing to living," Wilson said.