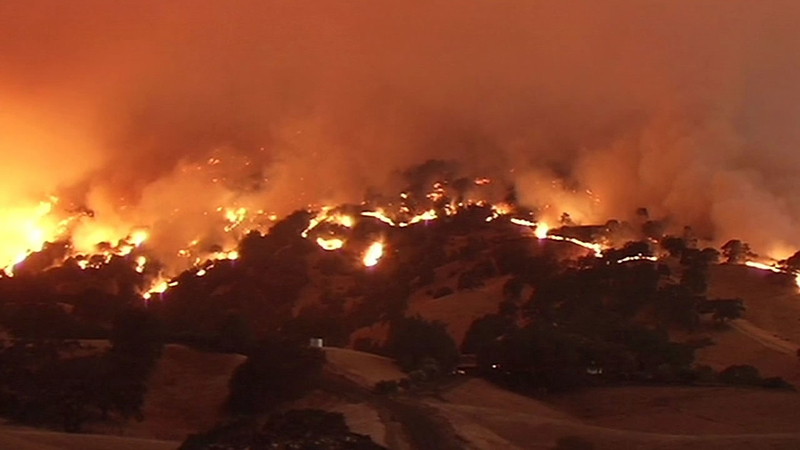 NAPA COUNTY, Calif. (KGO) -- An out of control wildfire has burned 4,000 acres southeast of Lake Berryessa and is just five percent contained. There are 150 structures threatened and part of Highway 128 has been closed.

Investigators believe the fire started by a car accident, but the cause is still under investigation.


Flames broke out around 2:30 p.m. at the south end of Lake Berryessa in the Cold Canyon area near Highway 128. Three hikers in the area were safely rescued.

Steep terrain and winds in the area are making the firefight difficult. Cal Fire says they have several air tankers doing water and fire retardant drops. They also have several hundred firefighters battling this fire from the ground.

.@LiveDoppler7HD is picking up the plume of smoke from the #WraggFire near Lake Berryessa. pic.twitter.com/0TojC0D4XM

Wind guests in the early evening reached up to 31 mph and steady winds have been coming from the southwest at 21 mph. Around 6 p.m. it was 73 degrees in the area with 38 percent humidity.

A large plume of smoke has stretched toward Winters and Davis. The smoke was also visible from Vacaville.

The Red Cross has opened an evacuation center at the Winters Community Center, located at 201 Railroad Ave, Winters, CA.